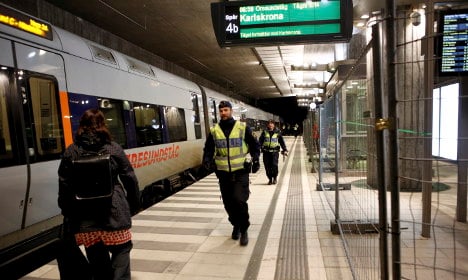 A police officer must be present for the ID checks to occur. Photo: Drago Prvulovic/TT

The police border checks at Malmö’s Hyllie station at the Swedish end of the Öresund rail link were introduced in November last year, and while they are not carried out by the police officers themselves, an officer must be present in order for any of the 72 trained civilian ID inspectors to carry out their duties.

The number of officers available to oversee the inspections is declining however because officers from across Sweden are no longer being brought to Malmö to help with the controls.

Local officers are sometimes required to carry out work elsewhere in the city, while the summer holiday season has also had an impact on available staff numbers.

She has previously described the border checks as “peripheral” to The Local, saying that “there are gaps in the net”.

The number of people seeking asylum in Sweden has dropped significantly since both ID and border controls were introduced in the country, but they are unpopular with many residents of the region, who have seen their commuting time between Malmö and Copenhagen increase by around 40 minutes.

Sweden’s Traffic Agency (Trafikverket) has adjusted Öresund train timetables in accordance with the controls. As a result, trains stop at Hyllie station regardless of whether the checks are carried out or not, to the ire of some passengers.

“It seems we don’t have controls anymore, yet the trains stand still for 15 minutes. A mockery of us commuters,” wrote one commuter in a social media post quoted by news agency TT.