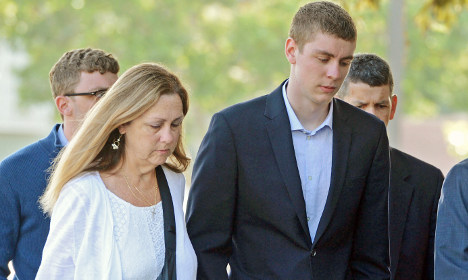 Swedish PhD students Carl-Fredrik Arndt and Peter Jonsson, cycling to a party at Stanford's Palo Alto campus a year-and-a-half ago, became sudden heroes when they noticed a woman lying seemingly lifeless on the ground behind a dumpster with her assailant on top of her.

“We see that she's not moving, while he's moving a lot. So we stop and think that this seems very strange,” Arndt told the Expressen tabloid. “Peter goes up to them and asks what he's doing and I follow. When he gets up we notice that she's still not moving in the slightest, so we ask something like 'what the hell are you doing?'”

When the man attempted to run off, the Swedes pursued him.

Arndt said: “I check that the girl is alive, because she was lying there completely still, while Peter immediately runs after and manages to catch him after perhaps 30 metres. We then hold onto him until the police arrive.”

Brock Turner, 20, was found guilty of three counts of sexual assault and sentenced to six months in jail with probation as the high-profile trial ended on June 2nd.

A statement written by the 22-year-old victim sharply hitting out at Turner and outlining the horrors she suffered quickly went viral after the trial. In it, she also praised the Swedish men who came to her rescue.

“Most importantly, thank you to the two men who saved me, who I have yet to meet. I sleep with two bicycles that I drew taped above my bed to remind myself there are heroes in this story. That we are looking out for one another,” read her statement, which was published in its entirety by Buzzfeed.

“We have not met her after the incident, but I saw it the other day and it was very strong. Obviously it's a great joy to have been able to help her,” said Arndt.

The case has captured global headlines and stirred debate about sexual violence on university campuses, and people from all over the world have been taking to social media to join in the praise of the Swedes.

“As usual, the Swedes are showing us how to be in the world,” commented one on Twitter. “Heroes… abso-freaking-lutely,” wrote another. “Courage. The stuff you don't really know if you possess until you're really put to the test. Wonderful men, these two,” tweeted a third in Swedish.

The Local has attempted to contact Arndt. Jonsson wrote in a statement published on Facebook that he would not respond to media requests for comments at this stage. However, he thanked friends and strangers for their support and encouragement, urging everyone to read the letter written by the victim.

“To me it is unique in its form and comes as close as you can possibly get to putting words on an experience that words cannot describe,” he wrote.