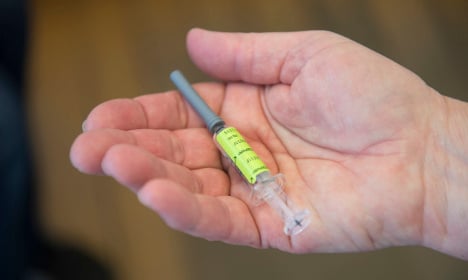 The study, carried out over the course of 2015 by Sweden’s Public Health Agency (Folkhälsomyndigheten) and Medical Products Agency (Läkemedelsverket), shows that over 97 percent of toddlers in the country are vaccinated against the 10 diseases included in the national childhood vaccination programme. Most of these diseases are under control as a result, the agencies claim.

Examples of diseases that are being kept in check are tetanus and rubella, of which there were no cases reported among Swedish children under the age of five in 2015. The bacterial infection haemophilus influenzae meanwhile had only one case reported among children from the same age group during the last year.

The levels of whooping cough in Sweden have also fallen compared to 2014, though it remains at a higher level than between 2009 and 2013. A total of 45 children were treated in Swedish hospitals for whooping cough last year, with one fatality. Invasive pneumococcal disease meanwhile saw the lowest level of reported incidence among children under the age of two since a vaccine was first introduced in 2009.

In its study, The Medical Products Agency said that it followed up on all adverse reactions to vaccinations reported in Sweden in 2015, and that their review showed that all vaccines were safe, with the most commonly reported side effects being fever and local swelling at the injection site.

COVID-19
Could 12 to 15-year-olds in the EU soon be given the Pfizer Covid vaccine?
Url copied to clipboard!