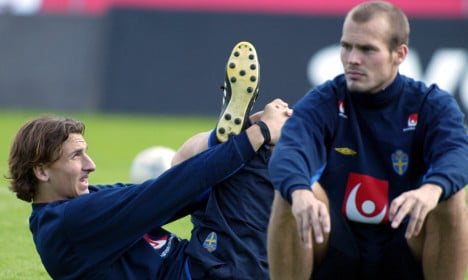 Erik Hamren’s Sweden open their campaign against the Republic of Ireland at Paris’ Stade de France on June 13th, and will also face Belgium and Italy in Group E.

And while former Arsenal and West Ham winger Ljungberg said Ibrahimovic’s play can steer Sweden into the knock-out stages, he also highlighted the heavy lifting other players in the team do for the striker.

“That’s how he plays, it’s very important for Sweden that he has a good tournament in order for us to progress,” he said.

“We have a lot of other players who don’t get as much attention who are doing the work at the back and covering up, so he can get that freedom to express himself, which is important for us or we might get cut open at the back.”

“They don’t always get the headlines, but they are just as important to the team.”

Ljungberg and Ibrahimovic rarely see eye-to-eye, with the latter once singling out the former as a “prima donna” in his autobiography. In response, the veteran said he “pitied” his former international teammate. Despite their differences however, the ex-Arsenal player admits that much of Sweden’s success or failure in France will depend on the 34-year-old forward’s form.

“He’s the biggest player in the team and a lot hangs on him to score our goals,” said Ljungberg, who coaches Arsenal’s Under-15 side having won the last of his 75 caps by captaining Sweden at Euro 2008, where they bowed out in the group stages.

Ibrahimovic is his country’s top scorer at European finals with six goals in 10 games, and of Sweden’s 19 goals in qualifying, he scored 11, including three in their play-off win against Denmark.

With Italy and Belgium tipped to progress from Group E this summer, Ljungberg said the Swedes could be the dark horses aiming to avoid bowing out in the group stages for the third Euro finals running.

Having qualified for France by beating neighbours Denmark in a two-legged play-off, Sweden go into the finals under the radar.

“We qualified through the play-offs, so we can’t regard ourselves as favourites, but we hope we can get through the group stages,” said Ljungberg.

With both Ljungberg and Ibrahimovic in the team, Sweden won their group at the 2002 World Cup ahead of England and Argentina, after grinding out 1-1 draws with both nations and a 2-1 win over bottom side Nigeria.

“It'll be tough, but that's sometimes a good thing, we played the World Cup with Argentina, Nigeria and England and we won it, it depends. It can raise your game and I hope that happens again,” added Ljungberg.

The ex-winger is tipping world champions Germany to add a Euro 2016 title to their Brazil 2015 crown.

“I'd hold the Germans are favourites, I like the fact they play as a team, they are doing really well and demanding a lot of each other, but they look very good,” said Ljungberg.

“They are well balanced, look at a side like England in the past where you had Scholes or Gerrard or Lampard and they all want to play as a Number Ten and you try to fix them in different roles, which doesn't always give the right balance in the team,”

“I think Germany are a bit more ruthless in that regards and I just enjoy watching them.”