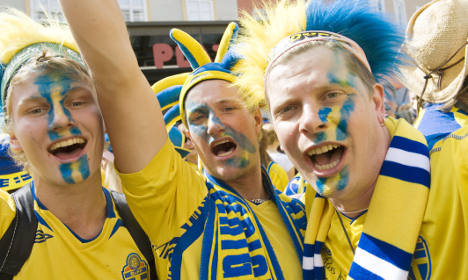 Funny wigs and face paint are not obligatory, but recommended. Photo: Henrik Montgomery/TT

1. Watch the action from where Sweden booked their Euro ticket

Sweden spent a fortune building the ultra-modern Friends Arena in Stockholm, and entry to the national stadium usually comes at a cost, but not during the Euros. Starting with their opener against Ireland on June 13th, every one of the Swedish national team’s tournament matches will be shown live at their home stadium, with the gigantic screens that usually hover above the pitch lowered so that spectators can watch the action from ground level.

Along with the football itself, there will be activities for the whole family, as well as bistro kiosks selling sweets, drinks and food. Admission is free, but with the best spot in the country certain to be popular, it’s worth turning up early. Wearing the Swedish national colours of yellow and blue wouldn’t go down badly either. More info here. Combine a rare opportunity to step onto the Friends Arena pitch with watching the Euros. Photo: Erik Nylander/TT

2. Cheer from the pier in Gothenburg

If the Friends Arena is likely to be Sweden’s biggest Euro 2016 party site, then Gothenburg’s own official Euro fest may well be a close second. All of the national team’s games will be shown on a mammoth 50 square metre screen at the city’s so-called 'Banana pier' (Bananpiren) in Frihamnen, ensuring all the Swedish action will be set to the backdrop of Gothenburg’s busy waterfront.

It doesn’t stop there. A variety of food trucks parked at the event should ensure a suitably international range of food is available for purchase, while there will also be ice cream and sweets on sale, and a DJ to provide further entertainment once the final whistle has gone. Entrance is completely free, and with the park opening three hours before every Sweden match, there’s plenty of time to get in early and avoid the queues. Malmö’s main Euro 2016 party won’t be on quite the same scale as Stockholm or Gothenburg’s, but what the southern city lacks in size it more than makes up for in creativity. The striking Moorish Pavilion (Moriska Paviljongen) in Folkets Park will show the vast majority of the games from the tournament on a big screen, and the seating area is covered by a tent just in case the weather takes a bad turn.

To go with the sport there will be events, guests and even the odd quiz, so brush up on your knowledge of home hero Zlatan Ibrahimovic if you want to do well. Barbecued food and drinks will of course be available to purchase too. Admission is free, for more information on the opening times for games check out the event’s Facebook page.

4. Roar for your nation at an historic Uppsala venue

Sweden’s fourth most-populated city is really little more than a town by international standards, but Uppsala boasts one of the country’s most eye-catching Euro 2016 viewing venues. Pavilion-like Flustret has been open since 1842, and the iconic club and restaurant will be showing all of the Euro 2016 matches on its outdoor terrace.

The pick of the bunch is of course the Sweden games, which will be shown indoors as well as outside for those not wishing to brave the elements. Doors open two hours before kick-off, and while entrance is free, it would only be polite to buy a drink or two. More details here.

5. Combine the match with a walk in Gothenburg's central park

Not to be confused with the similarly named nightclub in Stockholm, Gothenburg’s Trädgår’n is one of the city’s biggest concert and clubbing venues, set in the middle of the central Garden Society of Gothenburg's park just off main drag Avenyn. For Euro 2016 the venue is going big, showing all of Sweden’s matches as well as the final itself on screens both indoors and on their outdoor terrace, with a DJ providing music, and grilled food available to purchase.

General admission costs 50 kronor ($6) and doors open two hours before games, while VIP packages are also available, if that’s your thing. Tickets can be bought here.

6. Get the international feel in Stockholm's Boqueria

Tapas bars are taking over Stockholm these days, and one of the most distinctive restaurants in that vein is Boqueria in Mood Gallerian. Boasting its own indoor square, the Spanish-style outlet provides an atmosphere close to that of a Mediterranean outdoor terrace, yet suffers from none of the problems that the Swedish weather can cause.

Spaniards love their football, and appropriately, Boqueria will be showing most of the games from the European Championships on screens set up in their mini-plaza, with music performed before and after kick-off. Expect a healthy dose of bias towards Spain when La Roja are playing. Entry is free, and pintxos can be bought from the bar. Boqueria will be a must for Spain's games at Euro 2016. Photo: Hasse Holmberg/TT

Check out our interactive calendar below for more of what's going on in Sweden!