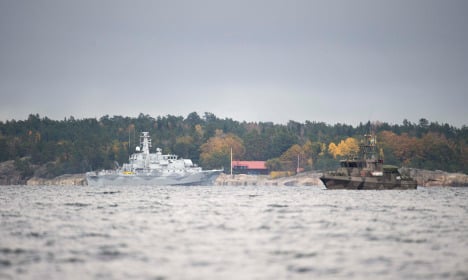 “We suspended the exercises because there were indications of unknown underwater activity,” spokesman Jesper Tengroth said, using terminology the military often employs for foreign submarine hunts.

He would not be drawn on the “indications” the military had received.

In October 2014, Sweden launched a massive hunt for a foreign submarine, suspected to be Russian, in the Stockholm archipelago over an eight-day period.

The military subsequently confirmed “a mini submarine” had violated its territorial waters, but was never able to establish the vessel's nationality.

Tengroth said on Thursday that after the April 21st-24th exercises were suspended, the military launched maritime surveillance in the area and divers were sent down to investigate.

“Tracks were found on the seabed (…) but they were nothing that could be linked to these indications,” he said.

He also stressed that the phrase “unknown underwater activity” had a broad definition and did not only apply to submarines.

A non-Nato country, Sweden has also stepped up its military capabilities and exercises with the alliance, amid signs of more assertive Russian behaviour in the Baltic region, including Russian planes regularly skirting or violating the national airspace of neighbouring countries.