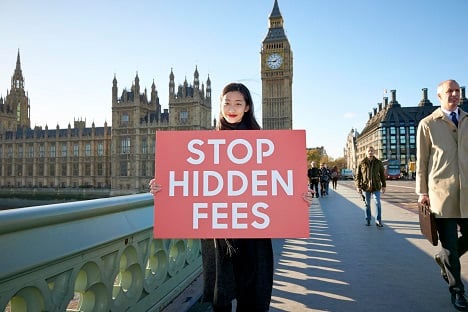 While this is one option, it’s not likely to be the cheapest – and there are a range of other services that you should consider before sending your hard-earned cash across borders. Unlike domestic payments, there are a multitude of fees and exchange rate spreads to think about.

Read on for a guide to the best options for international transfers.

How much does it cost to send money abroad?

This depends entirely on what service you choose to use to send money overseas. But there are a few key costs to watch out for.

What are my options?

There are three main options when sending money abroad – each have their advantages and disadvantages.

Using your bank may seem like the best option, but be wary of hidden fees. While your bank may claim to offer free or commission free international payments, they will often use their own exchange rate that differs from the one you’ll see on XE or Google. This means they can skim an extra fee from your transfer – some charge as much as 5 percent in hidden fees.

Using your bank may be convenient, but it’s worth comparing their rates to other providers too – you might find you can save some money.

You’ve probably seen them on your local high street. The likes of Western Union and Moneygram have a presence in many cities worldwide. While they also offer convenience – and cash pickup globally – they’re also guilty of overcharging for their transfers.

On top of the fees they charge up front, take a look at the exchange rates they offer. Often both the buy and sell rates on their LED boards will be significantly wide of the Google or XE quoted mid-market rate.

Over the past few years a number of ‘FinTech’ (or financial technology) providers have emerged offering a much better solution for sending money overseas.

TransferWise can send direct to bank accounts in many countries worldwide – and while it doesn’t offer cash pickup like some high street providers, it’s up to eight times cheaper than using your bank or a high street broker.

How safe is it to send money abroad?

It’s generally safe to use online providers for international money transfers – but there are a few things to consider. Financial services are heavily regulated globally.

In the UK, for instance, providers are regulated by the FCA (Financial Conduct Authority). Online services also have to comply with the same KYC (Know Your Customer) regulations as the banks that were bought in in 2007 to tackle money laundering.

Something to consider with any provider is whether they are authorised or registered by the FCA. There are different risks associated with both.

To find out whether a firm’s authorised or registered, you can search the FCA register here.

How do I choose the best provider for international money transfers?

While the best deal likely depends on where you’re located and who you bank with, it’s worth carefully weighing up your options to make sure you don’t get ripped off when you send money abroad.

Here are a few simple steps to take:

1. Get a quote from your bank. While it’s unlikely to be the cheapest option, it gives you a starting point. Ask them for any fees they charge – and for the exchange rate and exchange rate spread they charge (they may not declare the latter). Compare the rate they’re offering to the one on Google or XE to get an idea of any fees hidden in the exchange rate.

2. Compare this quote to online providers like TransferWise for the best price. It’s also worth considering how quickly you need your money to arrive at its destination – many online providers provide a delivery estimate tool to give you an idea.

3. If you decide to go with an online provider, do your research. Check their reviews on TrustPilot, look at their status with the FCA and compare their rates to the Google and XE rate to make sure you’re getting the best deal.

Ultimately, the choice is yours, but it’s always worth comparing different providers – and TransferWise has a reputation as one of the cheapest and most reliable.

This article was sponsored by TransferWise.

File photo: Stina Stjernkvist/TT
Stock markets across Europe suffered for the third day in a row as the arrest of a top Huawei executive in Canada has raised the spectre of an all-out trade war between the US and China.
For the Stockholm Stock Exchange, it meant a blood-red trading day that ended as the worst of the year thus far. The OMXS Stockholm 30 index fell by a combined 2.8 percent.
The majority of the companies on the index lost value, with the exception of Ericsson, which seemed to benefit from the news about its Chinese competitor Huawei with a 1.8 percent increase. Airline SAS also saw its stock increase, rising 4.2 percent thanks to sharp declines in oil prices.
Among Thursday’s biggest losers was the mining company Boliden, which suffered a 6.1 percent drop. The stock of the Stockholm-based tech company Hexagon fell 5.6 percent.
Meanwhile, the stock of Swedish auto safety equipment manufactor Autoliv fell 6.1 percent on the news that it expects to pay some 1.8 billion kronor in fines as a result of an European Commission investigation into anti-competitive behavior in the EU.
Stockholm was far the only European bourse to have a gloomy Thursday. The CAC index in Paris fell 3.3 percent, the DAX index in Frankfurt dropped 3.5 percent and the London Stock Exchange's FTSE index decreased by 3.2 percent.
SHOW COMMENTS
Url copied to clipboard!