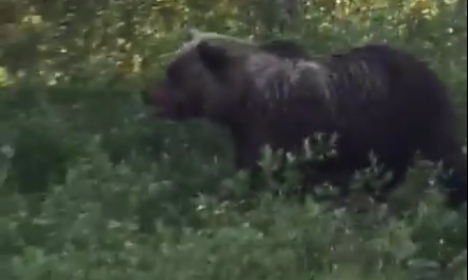 The bear moments before it picks up the elk in its jaws. Photo: Anton Söderberg

Anton Söderberg, 29, was on his way to work at 5am in Dorotea, northern Sweden, when he spotted the elk mother and her baby, which appeared to be only a few days old, on the road. Then he saw the bear.

“My first thought was, is this possible? It's nothing you think you're going to see. I saw them on the road when the bear chased after the elks and brought down the calf,” he told The Local late on Thursday.

He managed to get his phone up to film the bear carrying the helpless elk between its jaws.

“It's brutal and rather heartbreaking to see how the cow is standing there watching her child getting eaten. But it's (…) the course of nature. I'm mostly fascinated at all the attention this has got,” he said.

The video quickly went viral after Söderberg posted it on his Facebook page and he said he had been fielding questions all day since it was first written about by regional newspaper Västerbottens-kuriren.

“And friends and acquaintances have been in touch. It was a much more hectic day than I had expected. I wasn't going to put up the film on Facebook at first. I called my dad and told him about it, and he asked me to post the video so that he could watch it. If he hadn't done that, I don't know if I would have.”

Around 2,700 brown bears live in Sweden, according to WWF. They are the country's largest predators with an adult male weighing up to 250 kilos. However, they are reserved and tend to stay away from humans.

But as a calm northern Swede, Söderberg seemed unfazed by having been five metres from the bear.

“I've been close to other animals and bears. Including three bear cubs, this was my eighth bear. I drive a truck as part of my job and spend a lot of time in unpopulated areas. I also hunt in my spare time,” he said.

This is not the only close encounter with a bear in Sweden in the past year. In October a hunter spoke to The Local about his surprise when his dog chased a 120-kg beast up in a tree. And last May, another Swede grabbed global headlines after he scared off a charging bear by roaring at it.