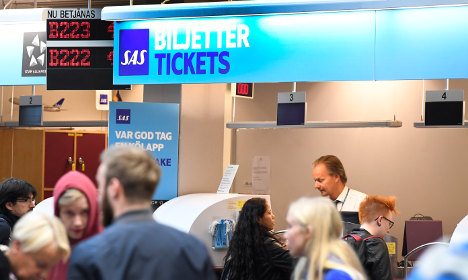 The walkout comes during a peak travel season, and has hit charter groups hard. Photo: TT

“The mediators have called us to a meeting,” SAS spokesman Fredrik Henriksson told AFP, adding that the airline did not yet know whether the Swedish pilots union SPF had agreed to the talks.

SPF did not return AFP's calls for a comment.

“We want to sit down at the table as soon as possible,” Henriksson said.

On Sunday, SAS cancelled 220 flights operated by Swedish pilots, affecting 26,000 passengers. On Friday and Saturday, another 24,000 passengers were stranded by cancelled flights.

Flights operated by Danish and Norwegian pilots were running as normal.

The walkout comes during a peak travel season, and has hit charter groups hard.

The strike began Friday at 6 p.m. after the pilots union rejected the mediators' proposal of a 2.2 percent wage increase, insisting instead on a 3.5 percent raise.

“That would mean a cost increase of almost 100 million kronor ($12 million, €10.7 million) a year for SAS. We can't afford that given the current competition,” SAS chief executive Rickard Gustafson told news agency TT.

SAS said it had not calculated how much money it was losing because of the strike, but financial analysts estimated it was costing the airline at least $1.2 million (€1.06 million) a day.

Analysts said the losses could be even greater if customers were to lose confidence in the airline's dependability because of the strike.

“SAS has to weigh the loss of prestige against the consequences of higher wage costs … People might be hesitant to choose SAS next time,” air industry analyst Matts Hyttinge told TT.