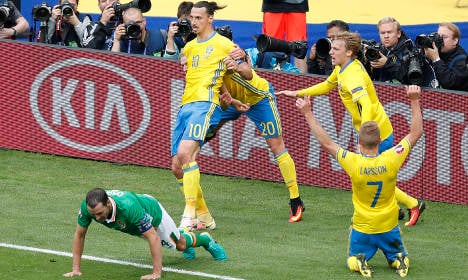 Ireland went ahead early in the second half when chaotic Swedish defending allowed Wesley Hoolahan to slam home an excellent strike from a Seamus Coleman cross.

But fortune favoured Erik Hamrén's men when Irish centre-back Clark accidentally headed a Zlatan Ibrahimovic ball into his own net, and the score would stay level at one each until the final whistle.

Sweden started the brighter of the two teams, with Ibrahimovic and Emil Frosberg threatening down Ireland's right flank early on.

But The Republic responded well in the ninth minute, when a volley from Jeff Hendrick forced Andreas Isaksson into a strong save.

And the men in green had the best early chance. Clark nearly assisted a goal for his own team when he flicked a corner on dangerously towards the far post, but though all the ball required to find an empty net was the slightest of touches, John O'Shea could only come agonisingly close to applying the finish.

The Swedes then went on to dominate possession for the remainder of the first half, with the Irish happy to sit back and wait for chances on the break.

And those chances did come. Like when Robbie Brady flashed a vicious shot from distance just over the bar. Minutes later, Hendrick would hit the upright from even further out.

Ibrahimovic would miss an even bigger opportunity in the 38th minute. A scrappy attempt from Ireland to clear a Swedish corner resulted in the ball breaking to the star striker. But Sweden's record goalscorer could only send his shot high from close range.

The Scandinavians seemed to sleepwalk their way through the start of the second half, and Martin O'Neill's more energetic team were happy to take advantage. Coleman produced some excellent wing play on the right flank before switching play to an unmarked Hoolahan at the other side, and the Norwich midfielder provided the finish the move deserved.

The goal woke Sweden up somewhat, and they subsequently sent in a series of corners towards the Ireland area, though none ended in a goal.

Hamrén decided to mix things up, and his introduction of John Guidetti for Marcus Berg just before the hour mark would have decisive consequences. It was the Celta Vigo man whose neat flick fed Ibrahimovic after an excellent pass from Forsberg, and the outgoing PSG striker produced a teasing cross that Clark haplessly sent into his own goal for Sweden to equalize.

Ibrahimovic had a chance to win it in the 81st minute, but he was unable to direct Martin Olsson's cross towards goal, and in truth the Blågult could be content to take their solitary point, as they failed to register even a single shot on target in 90 minutes.

The result leaves Ireland and Sweden level with one point each in Group E, pending the result of Belgium v Italy later in the evening. Sweden's next game is against the Italians on Friday.