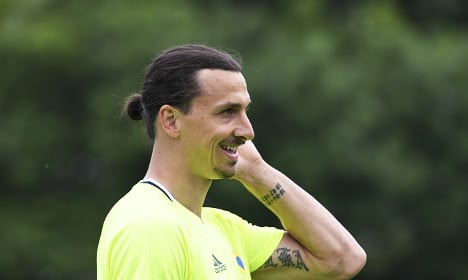 O'Neill has been reminded numerous times in recent days that, while working as a pundit a decade ago, he described Ibrahimovic as “the most overrated player on the planet.”

Now 34, Manchester United target Ibrahimovic appears to be getting better with age and heads into the Group E opener match at the Stade de France fresh from scoring 50 goals in all competitions in his final season with Paris Saint-Germain.

“Ten years ago that might have been the case. Lots of things can happen in that time,” O'Neill admitted told a press conference on Sunday.

“He is a top-class player, one of the best in Europe, if not the world. He's Sweden's talisman and will be hard to keep quiet in the course of the game.

“All world class players, no matter how well or closely they are marked, are able to elude things during the course of the game and he is one of those players.”

In a group also containing Italy and Belgium, a defeat for either side could be a decisive early blow to their prospects of reaching the last 16.

Ibrahimovic is probably gracing a major international tournament for the last time after scoring 11 goals during qualifying for Erik Hamrén's men.

He is familiar with the Stade de France, where he made the last appearance of a prolific four-year spell with PSG in the French Cup final against Marseille three weeks ago.

At international level he is aware of his responsibility captaining a team otherwise lacking in star quality. Ibrahimovic is looking to become the first player to score at four separate European Championships.

“First and foremost we want to start the tournament with a good game,” the Swedish star said. “We need the points. We know we are not the favourites but we are here so that means we are a good team.

“I have played a lot of championships and I go into this tournament with freedom to play as well as I can.

Sweden coach Hamrén indicated that he has a full squad at his disposal, while Jon Walters is set to be available for Ireland after struggling recently with an achilles problem.

“He doesn't have any reaction at the moment. He's feeling fine and I hope he's available for us,” said O'Neill of the Stoke City forward.

Veteran striker Robbie Keane is also available after overcoming a minor knock, although it is likely to be Shane Long who leads the line.

The game is Ireland's first at the Stade de France since they were famously denied by France in a World Cup qualifying play-off in 2009 after a Thierry Henry handball set up William Gallas to score the decisive goal.

Keane had earlier scored for Ireland before the incident that caused an international outcry. But he insisted it is not on his mind now.

“It's something you have to forget about. This is a completely different situation and certainly me and the coaching staff are fully focused on this game.