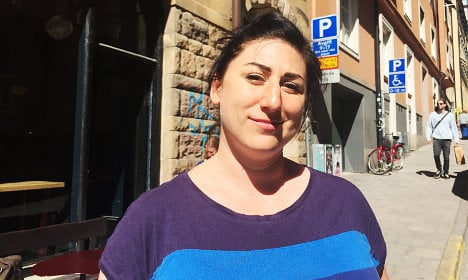 Connie Askerbäck was surprised but delighted after winning the case. Photo: Private

Connie Askenbäck came to Sweden to study mathematics at Mälardalen University (Mälardalens högskola), a course which was later rapped for poor teaching standards.

Following two years of studies, she asked the college in 2013 to return her tuition fees of 183,000 kronor (at the time $28,000) after the Swedish Higher Education Authority (Universitetskanslersämbetet) criticized the specific mathematics and statistics course as not reaching an appropriate standard.

“It was everything from trouble communicating with teachers to a programming class where they didn’t even have enough chairs,” she told The Local.

“It felt surreal, to the point where I questioned my own sanity.”

Askenbäck, who has family here and later married a Swede, said the Västmanland district court's ruling had come as a pleasant surprise.

“The school can still appeal, but at least it feels like it’s finally coming to an end. There’s a huge sense of relief.”

The college said on Tuesday it was examining the ruling with its lawyers before deciding whether to appeal.

Askenbäck expressed frustration that the state-run college had fought the case so hard considering they were the ones who informed her and her classmates in an email that the higher education authority had deemed the course  to be of poor quality.

“I guess it’s a big thing for the state. It’s a precedent-setting case.

In its ruling the court said the college could be likened to a service provider that had failed to honour the terms of a contract.

And because the college had offered such a poor quality service, “the court is of the view that the university breached its contract with Connie Askenbäck since her education lacked any practical value. For this reason the court finds that Connie Askenbäck has the right to get back everything she paid in fees.”

Mälardalen University has campuses in the central Swedish towns of Västerås and Eskilstuna. The school had consistently refused to refund the money.

“It’s absurd that this has gone on for so long,” said Askerbäck.

“I really want a degree and hope now to be able to start studying again soon.”

She also stressed that she would not have been able to take the case without the Sweden-based Centre for Justice (Centrum för rättvisa), which helps individuals protect their human rights through litigation and sued the school on behalf of the former student.

“This sends a very important signal to the country’s colleges and universities that they must assure the quality of the courses offered for a fee to foreign students,” said the centre’s director, Clarence Crafoord.

“But it’s also a signal to anyone else affected in the same way as Connie that they are not without rights,” he told the TT newswire.

Although higher education is more or less free for Swedes and students from the EEA area, overseas students have paid tuition fees since 2011.