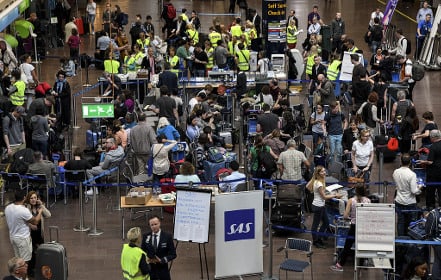 After a year studying in Uppsala Jovi Kerr, Vikki Ogilvie and Marie Require all learned on Monday that their SAS flights home were cancelled.

“I was originally meant to be flying yesterday to London at 3.30pm and was en route to the airport when I found out it had been cancelled,” Ogilvie, from New Zealand, told The Local.

She is about to move to London but has had to put her plans on hold.

“It changed in my Google calendar to say it was cancelled and I had to go to the website and check the flight status to confirm, because I thought it was a glitch”.

Kerr was also headed for London, but his Tuesday flight too was cancelled.

“I wasn't emailed about the possibility of a cancellation or contacted in any way until the evening before my flight,” he said.

“After hours of messaging them on Facebook, they finally gave me a solution, one which meant I had to leave in 30 minutes,” said Kerr.

He finally flew to Malmö, caught a train to Copenhagen, from where he will be able to fly back to the UK.

“I don’t blame SAS for the issues, but their customer service wasn’t helpful and I did not know where or when I'd be going”. Marie Riquier, who was supposed to fly back to France on Tuesday afternoon, said she had received “no excuses, no warning” from the airline.

She heard from a friend that SAS was cancelling flights and found out to her dismay that hers was affected.

Riquier said she spent hours on Monday night trying to reach SAS. She eventually gave up before trying again on Tuesday morning.

“I waited more than 30 minutes and one of their employees rebooked my flight for tomorrow, same schedule but without being able to confirm it 100 percent because they don’t know yet about tomorrow’s flights, if they will be cancelled or not”.

Marie needs to reach Lille in the north of France, but can't book train tickets from Paris until she knows when she'll land.

Ogilvie said the strike had forced her to postpone two important meetings.

“But SAS were as helpful as they could be,” she reckoned, even though she had to pay for her own train ticket to Copenhagen.

In spite of the turmoil, Riquier was trying to stay positive:

“I heard they take care of hotel rooms, food and drinks, so no one is really left without any solution. It could be much worse,” she said.

But Jovi Kerr was still annoyed.

“It's all been super stressful and I don't trust SAS' Swedish pilots enough to fly with SAS again”.

With SAS pilots’ wage claims not yet satisfied, their strike is expected to continue. Negotiations reached a deadlock last Friday between the pilots' union and the employer. The parties have not even been able to agree on how much the lowest-paid pilots receive in salary.