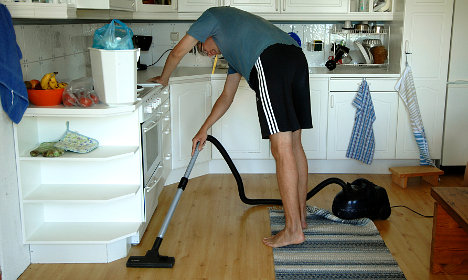 This is what a man vacuuming a Swedish apartment looks like, although it's a different apartment and a different man. Photo: Hasse Holmberg/TT

Exasperated neighbours say the man vacuums for two to five hours at a time, and often leaves the machine running on the balcony. He also plays very loud music, which he claims is to drown out the sound of his own vacuuming.

And though he’s presumably not the kind of gent to leave dust in the filter of the tumble dryer, he does like to wander around the communal laundry room naked, neighbours claim. He disputes this.

His landlord also accuses him of showering so often and at such length that the apartment has sustained water damage.

A rental tribunal has given the landlord the all-clear to boot the man out. But he has lodged an appeal and neighbours can expect to find him wielding his hoover nozzle for a while more.

Don't miss our etiquette primer: Murder in the laundry room