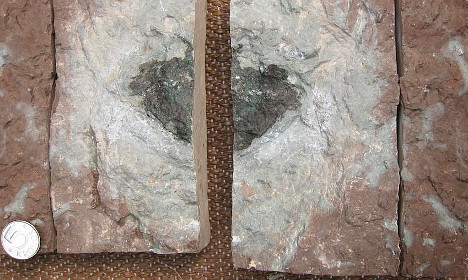 The biscuit-sized remains are unlike any other meteorite found on Earth to date, and may shed light on the history and formation of our Solar System, they reported in the journal Nature Communications.

Dubbed Öst 65, it is thought to be a splinter of a potato-shaped rock some 20-30 kilometres (12-19 miles) wide, which had smashed into another much larger body, sprinkling our adolescent planet with debris.

Previously, remnants of only one of the two rocks had been found, in the form of meteorites called chondrites.

But now scientists believe they have unearthed a piece of the second space orb, boosting the theory of a major smash-up between two galactic travellers.

It is thought that the breakup of the bigger chondrite body, about 100-150km across, had yielded a major cluster of rocky debris in the asteroid belt between Mars and Jupiter.

The resultant flux of extraterrestrial material, some of which rained down on Earth, coincided with a massive expansion of invertebrate ocean life at a time our planet's landmass was largely fused together into a supercontinent called Gondwana.

“The single meteorite that we now found… is of a type that we do not know of from today's world,” study co-author Birger Schmitz of Lund University in Sweden told AFP.

Along with about 100 chondrite pieces discovered to date, the new alien fragment had sunk to the floor of an ocean covering parts of what today is a limestone quarry in southern Sweden.

“The object contains very high concentrations (compared to Earth materials), of elements such as iridium, which is very rare on Earth,” Schmitz explained by email.

“The meteorite also contains high concentrations of rare isotopes of the element Neon” — and in different proportions than in chondrites.

The team measured telltale signs of cosmic radiation in the meteorite to determine how long it had flown around in space before crashing to Earth.

“Our meteorite fell 470 million years ago,” said Schmitz — more or less the same period as the chondrite fragments.

The mysterious morsel “may be a fragment of the impactor that broke up the (chondrite) parent body,” concluded the study.

The extraterrestrial lander may be the first documented example of an “extinct meteorite” — so called because it's parent body had been entirely consumed by space collisions, meaning no more fragments can fall to Earth today.

Chondrites still drop to our planet every now and then.

The findings mean that today's meteorites — on which scientists base much of their assumptions about our Solar System's formation — are not fully representative of what is, and once was, out there.

“Apparently, there is potential to reconstruct important aspects of solar-system history by looking down on Earth sediments, in addition to looking up at the skies,” wrote the study authors.