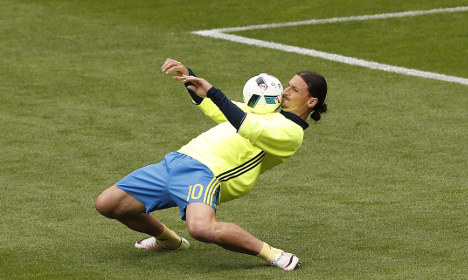 There have been suggestions that the current competition in France could be the star striker's swansong for his nation, but on Wednesday he was named in an initial 35-man Sweden squad for the Rio Olympics in August.

The squad will be whittled down to 22 players in mid-July, with only three of those squad members allowed to be born before 1993.

Along with Ibrahimovic, 34, the enlarged squad includes only two other players currently featuring at the European championships in France, defenders Victor Lindelöf, 21, and Ludwig Augustinsson, 22.

Coach Håkan Ericson, who was also the manager of Sweden's 2015 U21 European champions, said he faced a problem trying to find clubs ready to release players for the August Olympics.

“Some clubs say yes, others no, and others have not yet decided.”

Ibrahimovic is out of contract with Paris Saint-Germain after four seasons in Ligue 1, but is yet to commit to a new club, although Manchester United are rumoured to be favourites to seal his signing.

With 62 goals in 114 appearances, he is Sweden's all-time leading goalscorer. Though the Malmö native has won league titles in France, Holland, Spain and France, he has never claimed an honour with his country, something the Olympics would give him another chance to achieve before retiring.