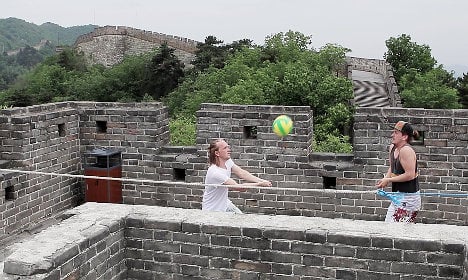 They believe they are the first people to do so, and we’d wager they’re probably right.

“We were nervous that the police might stop us but it turned out well. We didn’t see any signs saying we couldn’t play sports on the wall so we just went for it,” Alexander Jönsson told The Local.

The brothers brought the volleyball with them all the way from Sweden. Once in China, they acquired a rope.

“We found a watchtower and thought, hey, let’s put the rope up here. It was quite high and we really didn’t want to lose the ball. We almost did at one point.”

They captured the moment with a drone camera, which drew attention from other tourists.

“The Chinese people thought we were funny. They wanted to know what we were doing and why we had a drone.”

So what’s next for the brothers from Lysekil?

“It involves ice and doughnuts. It’s going to take some time. Hopefully by the end of the year.”

We’ve actually written about the Jönsson brothers before after they fired a doughnut into space from Norway.