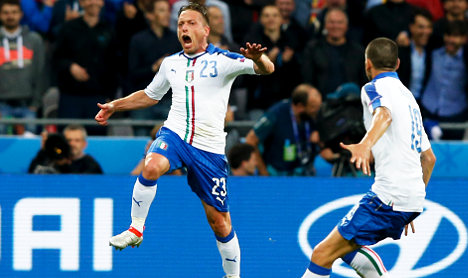 Kallström said communication, and pressing Italy while they have possession, will be key.

“We have to find the right balance betweeen attack and defence. We can't leave them too much space. Against Belgium, they played a lot of balls in deep so we have to communicate well to avoid being caught in the trap,” said Kallström.

Speculation over Ibrahimovic has been mounting since the Sweden striker left Paris Saint Germain after four years in the French capital, with Manchester United favourites to become his next destination.

But Hamrén insisted on Thursday the news has not swayed the Swedes from their objectives.

“With a player like Ibrahimovic there are always rumours, but they don't affect us,” Hamrén told media in Toulouse on Thursday.

“It doesn't bother us and I don't see anything negative about it. That's football.”

Hamrén, however, will be hoping Ibrahimovic finds his scoring boots after a disappointing performance in a 1-1 Group E draw with the Republic of Ireland that has dented the Scandinavians' hopes of qualifying for the last 16 knockout phase.

Adding to their woes is the fact Italy upset pre-tournament predictions to stun Belgium, ranked number two in the world, 2-0 in their opener this week.

A win would see Antonio Conte's men, beaten finalists in 2012, secure their place in the next round ahead of their final group game against the Republic of Ireland in Lille next week.

When Italy defend, their wingbacks quickly track back to form a five-man defence, a tactic Hamrén believes will make it more difficult for Sweden to create scoring chances.

Hamrén added: “We'll be up against a very well organised team which is very strong in defence, but also in attack.

“The biggest threat will come from their attack. They get forward quite easily so it will be up to us to close them down. We saw how solid they are, they have three extra central defenders.

“It's likely we won't have a lot of chances, so we have to be efficient.”

“We also have to keep the pressure on them, that will be key for us.”

The Republic of Ireland dominated Sweden for 60 minutes, taking the lead through Wes Hoolahan's brilliant strike before Ciaran Clark turned a cross by Ibrahimovic into the Irish net late in the second half.

Hamrén added: “Italy are a more quality side than Ireland, so I expect it to be a more difficult match.”