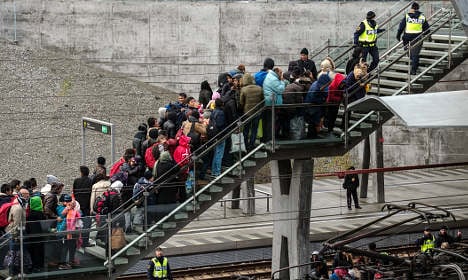 Six of the eight parties in the Riksdag back the new law, which will make it much tougher for asylum seekers and other non-EU immigrants to move to Sweden.

The Social Democrat-led coalition government pushed for the new law after Sweden took in an unprecedented 160,000 asylum seekers last year.

“This is a necessary decision to ensure that Sweden doesn’t end up in the same situation as in autumn 2015,” said Morgan Johansson, Sweden’s justice and migration minister, in a heated Riksdag debate on Monday.

Sweden could not be the only country in the EU offering permanent residence permits to most refugees, said Johansson.

“Our system would collapse” if 200,000 of the one million asylum seekers and migrants expected to come to the EU this year wound up in Sweden, he said.

If passed, the temporary law will come into force on July 20th and will remain in place for three years.

For asylum seekers, the law will kick in retroactively from November 24th 2015. For most people arriving after that date it will entail temporary rather than permanent residence permits, as well as severe restrictions on family reunification and a tightening of maintenance requirements.

Only the Left Party and the Centre Party oppose the law, making Tuesday’s vote little more than a formality.

“A crappy law can never be anything other than a crappy law, no matter how you dress it up,” she said.

“Preventing vulnerable families from reuniting is just inhumane,” she said.

This is a view shared by groups like the Red Cross and Save the Children, which have both launched campaigns urging politicians to rip up the law.

The decision to support the law was a particularly painful one for the the junior coalition partner, the Green Party. Maria Ferm described it as “without doubt” the most difficult deal ever struck by the party.

“For us it’s crucial that the temporary new laws are as short-lived as possible,” she said.

Paula Bieler from the nationalist Sweden Democrats said the law was necessary, but argued that it did not go far enough.

“We need to ensure that Sweden doesn't seem an attractive country to get to,” she said.

She regretted that the law did not quite hit the minimum required by the EU, as Sweden would still give residency to people considered particularly vulnerable.

The Sweden Democrats also want the law to be made permanent and have called for family reunification rules to be tightened further.

SEE ALSO: Will you be hit by changes to Sweden's residency laws?