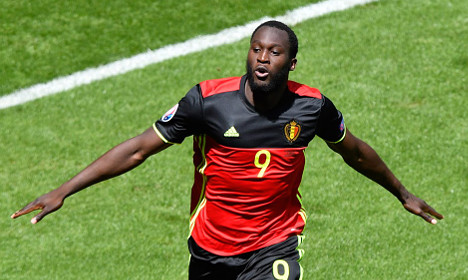 Neither side can catch Group E leaders Italy having both lost to the Azzurri. But after a slow start Marc Wilmots' Belgium travel to the Stadium Nice with their campaign mounting.

Ranked second in the Fifa world rankings, the Red Devils were widely criticized after losing 2-0 to the Italians in Lyon in their opener.

Belgium then clicked against the Republic of Ireland in Bordeaux on Saturday as a second-half Lukaku brace, either side of an Axel Wiesel goal completed a convincing 3-0 win.

A point against Sweden will seal their progress to the knockout stage, but Belgians had expected much more from a talented group of players containing the likes of Lukaku, skipper Eden Hazard and Kevin De Bruyne.

From the French-speaking Wallonia region, Wilmots was in the firing line after the Italy loss, targeted by some media, particularly in the Flemish-language press, who accused him of not getting the best out of
arguably the best squad at the tournament.

But he hit back at critics after the Ireland win, saying that certain people were trying to turn Belgian fans against him.

“We have just had four successful years, and then with the first defeat (against Italy) that is all forgotten. It is manipulation,” the 47-year-old said after Saturday's game.

After a fortunate 1-1 draw against the Irish in their opener and a 1-0 defeat to Italy on Saturday, Sweden need to win to stay at Euro 2016.

Superstar striker Zlatan Ibrahimovic's team have not mustered a single shot on target in two games, their equaliser against Ireland coming after defender Ciaran Clark turned the ball into his own net.

“The first game we did nothing good and we still got a point. Today (Friday) we did a lot of good things and got zero points,” Ibrahimovic said after the Italy game which at least saw an improved display.

The 34-year-old Swedish talisman is one of several box-office stars like Cristiano Ronaldo, Robert Lewandowski and Thomas Müller who have yet to catch fire at Euro 2016.

Were Ibrahimovic to find the net in Nice he would become the first man to score in four separate editions of the competition, after six goals in Euro 2004, 2008 and 2012.

The sides have met once before at a European Championship finals, sixteen years ago, when co-hosts Belgium — with Wilmots in the line-up — won 2-1 in Brussels at the Euro 2000 opening game.

Belgium have not been back at the Euros since then, but with the current star-studded generation, high home expectations are matched by a sense the time has arrived for the team to justify its world ranking.

“People will be waiting for Belgium and waiting for me (to deliver) but we'll give our utmost,” said Hazard in the run-up to the tournament.