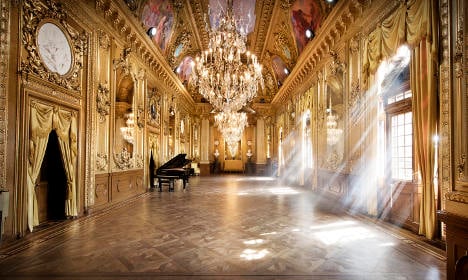 The drop-in weddings will be held on July 29th in the 19th century Royal Swedish Opera's opulent Gold Foyer (‘Guldfoajén’), and will be overseen by no less than the Mayor of Stockholm, Karin Wanngård, as well as Swedish opera singer Rickard Söderberg.

“We’ve constantly been looking for something to do as part of Pride, and this felt like the right idea,” the opera's communications officer Frida Nilson told The Local.

“It’s a chance to take advantage of our wonderful building and be a part of the happiness and love there is during Stockholm Pride,” she added.

The Royal Swedish Opera also said that while well-known tenor Söderberg is set to stick to his duties as a registrar rather than perform, there could be a musical surprise or two throughout the day.

As for fellow registrar for the day Wanngård, the Stockholm Mayor has highlighted the symbolic importance of the weddings.

“First and foremost it’s a fun event. Getting married is a big day in a person’s life. But it is also an important symbolic gesture that shows Stockholm is characterized by tolerance, and that we are a city for all,” she said in a statement.

The weddings will take place in 20 minute slots which require booking in advance. Any couple hoping to grab a chance should email [email protected] to express their interest.