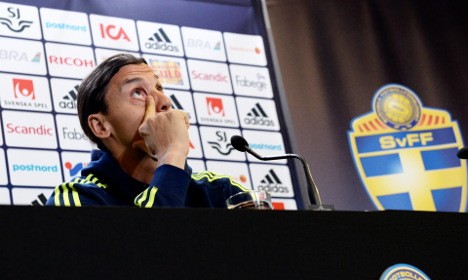 There had been some speculation that the striker could participate in the Rio Olympics, after he was named in an initial 35-man squad for the competition earlier this month, but Ibrahimovic also ruled that out.

Sweden coach Erik Hamrén said “this will be a big loss. He is unique”.

Sweden's record goalscorer with 62 goals, Ibrahimovic is looking to become the first player to score in four European Championship finals. His country needs to beat Belgium on Wednesday to stand a chance of advancing to the last 16.

“I will not participate in the Olympics because my last game will be the last game Sweden has at this Euros. So let's hope it goes as long as possible,” he said.

A record 10-time winner of the national Guldbollen award for player of the year, Ibrahimovic said he would go out with his head held high regardless of Wednesday's result.

“To finish in a disappointment, never. Because I'm very proud to be the captain of Sweden and of what I've achieved,”

“I want to take this moment to thank all the supporters because they made it possible for me to achieve what I have achieved. Without them it would not have been possible,”

“So wherever I go, wherever I come, I'll always bring the Swedish flag with me and stand with it. For me, disappointment doesn't exist, only proudness and gratefulness. I'm very thankful. So thank you.”

Ibrahimovic is out of contract with Paris Saint-Germain after four seasons in Ligue 1, but has yet to commit to a new club, though Manchester United are rumoured to be favourites to seal his signing.