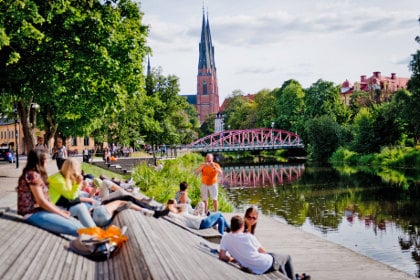 All rankings agree: Uppsala University is one of the world’s best universities. As well as high quality education, its 45,000 students also benefit from well-organized student life and proximity to the Swedish capital. It's old, it's got a great reputation, and Uppsala University remains the best place to study in Sweden. Here’s why.

Uppsala's network of so-called nations forms the heartbeat of the city's student life. The thirteen nations, each representing one or two Swedish regions, are students' main social hub.

By day they sell coffee and cakes, before morphing into bustling clubs at night. And you can always go to their pubs for cheap (but very tasty) burgers and beer!

To have any chance of social survival, students in the city need to get hold of a nation card by paying membership to the nation of their choosing. This is the golden ticket, and it costs just 30 euros or so per semester.

Previously, students were assigned a nation depending on where they came from in Sweden, but these days students can get in everywhere if they have the sacred card. The biggest is Norrlands, with around 7,500 members. Miss it at your peril. Where there are students, there are parties. And Uppsala is no exception. When students are not clubbing at nations, they organize corridor-parties.

Most students in the city live in small rooms off sprawling corridors. Flogsta, to the south-west of the city, is the biggest and best-known of the student housing complexes.

It counts fifteen seven-floor buildings, each with two corridors that are home to twelve people  – do the math (If you can't you probably have no business studying there!)

If you’re in the area around ten o’clock, you'll almost certainly hear the famed 'Flogsta roar'.

Located less than an hour from Stockholm, Uppsala allows students to take the train to the capital over the weekend and enjoy what it has to offer. Not that they need to get away of course, but a bit of variety can't hurt.

Other nearby rail destinations include Sigtuna and Dalarna in the Swedish heartland.

Uppsala is also small enough for students to bike everywhere: you can easily reach any part of the city in 15 minutes. Really, a bike is the first thing to buy when you move. Biking gets even more pleasant in the summer when you can head to lakes like Ekoln or Fjällnora.

And if you're tempted by a stunning Baltic escape, Uppsala University even has a campus on the island of Gotland. 4. It's one of the world's best universities

Uppsala University might “only” be the second best university in Sweden, but it’s also the 32nd best in Europe according to the Times ranking. And its 61st place in the Shanghai ranking makes it one of the best in the world. This international reputation attracts lots of people from all over the world: 12 percent of Uppsala University’s students come form abroad.

5. It's got history coming out its ears

Created in 1477, Uppsala University is the oldest university in Sweden. The 13 nations were founded in the 17th century and their original buildings are largely still in use. Paintings on the walls depict old nation leaders and key movers and shakers in Uppsala’s historical student life.

And when the spring celebration of Valborg comes round, Uppsala is probably the best place to celebrate. Students from all over the country come to watch the boat race on the Fyrisån river and get doused in champagne showers.

Uppsala is also very pretty and is popular among tourists. Uppsala Cathedral is one of the main attractions: its construction finished in the 19th century and many royal family members are buried there, like the ruthless and immodest King Gustav Vasa.

Preserving this history requires patience and dedication: sadly, the main university building, also emblematic of the city, is currently closed for renovation. Marie Zafimehy is an exchange student from France currently interning with The Local.