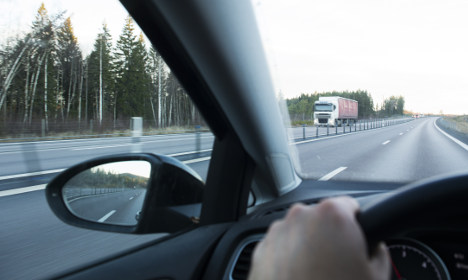 The man had been driving on the wrong side of the road for several kilometres. Photo: Fredrik Sandberg/TT

The accident occurred during the early hours of Thursday morning on the E4, a 1,590km long road that runs the length of Sweden to the northern border with Finland.

The family were attempting to overtake a truck when they collided head-on with an 80-year-old man, who was driving on the wrong side of the road.

“Two adults and three children in a car found themselves driving towards an 80-year-old man, who was on the wrong side of the E4,” Östergötland police press officer Thomas Agnevik told news agency TT.

“The family had nowhere to go and they collided, head-on.”

Incredibly, the family were lucky and managed to escaped without injuries. The 80-year-old man, who had driven for around 10km on the wrong side of the highway before the collision, was taken to hospital.

“He had driven from Mantorp to Mjölby on the wrong side,” Agnevik explained.

“We have questioned him and seized his license,”

The man is now suspected of gross negligence in traffic. The reason as to why he was driving towards traffic is currently unknown.