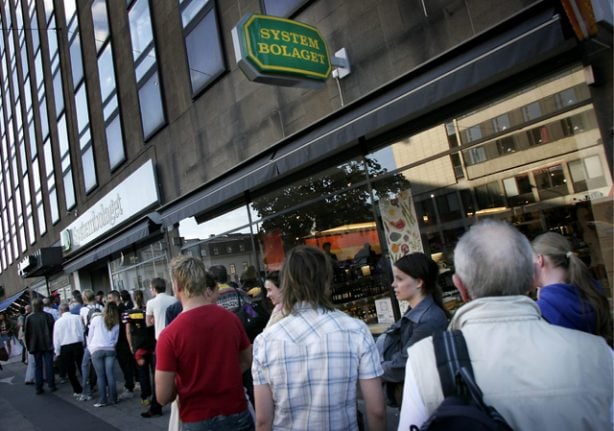 Systembolaget is a busy place around Midsummer. Photo: Stefan Bladh/SCANPIX/TT

Getting exceptionally drunk is something of a Midsummer classic, but new figures from the country’s state-run alcohol monopoly Systembolaget provide a fascinating insight into how that practice may be changing.

During the Midsummer week in 2015, Systembolaget saw 2,605,683 customers pass through its doors, an increase from the 2,589,072 in the same week in 2014. At first glance, that may suggest Swedes are buying even more alcohol for Midsummer than before, but there’s a twist in the tale.

Systembolaget’s figures also show that sales of wine, beer and cider actually decreased during the Midsummer week of 2015 compared to the same week a year prior. The only form of alcohol that saw sales increase was spirits, which went up to 586 thousand litres sold in 2015, from 575 thousand in 2014.

When converted into litres of pure alcohol, the overall decrease in purchases can be seen clearly, with 1,233 litres sold during Midsummer 2015 compared to 1,235 in 2014.

Where sales did increase however was in the non-alcoholic category, which went up to 109 thousand litres sold in 2015 from 99 thousand a year before. Systembolaget press officer Elina Yli-Torvi told The Local that more Swedes are now choosing the healthy option when it comes to picking their festive drink.

“It’s a trend that we have seen. Alcohol free is a category that has increased a lot in general. Above all it’s about more and more people making informed choices,” she explained.

“Swedes care about what we eat and drink. We expect to have an equivalent alcohol free drink available these days, and think that things should be just as festive with a non-alcoholic alternative.”

Swedes may be purchasing less alcohol for their big summer holiday, but unfortunately, that doesn’t translate to relief from the dreaded Midsummer queues.

With Systembolaget closed on both Midsummer’s Eve and the following two days, a last-minute rush to the alcohol monopoly the day before it closes is common, and 2015 was no exception.

On the Thursday of Midsummer week last year, 1,086,405 customers passed through Systembolaget’s doors, a huge increase on the 703,579 from 24 hours before. It seems last-minute shoppers this year should expect a long wait, whether they are in the market for a traditional drink or otherwise.