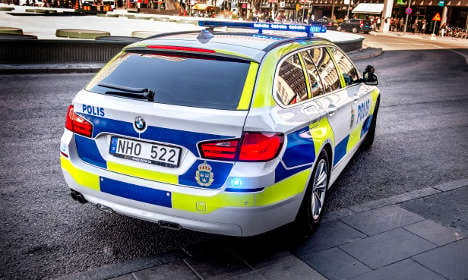 One person had been detained and other potential witnesses were being questioned. Photo: TT

The 25-year-old was found in a room at the centre in Mariannelund in southeastern Sweden, five months after a young asylum-seeker allegedly stabbed to death a refugee centre worker in southwestern Molndal.

“The circumstances and the evidence found at the site raise suspicions that she was murdered,” police said in a statement, without indicating whether the victim was an asylum-seeker or employee.

However, sources told Aftonbladet newspaper that they did not think it was someone who worked at the centre.

One person had been detained and other potential witnesses were being questioned.

The trial of the asylum-seeker charged with the Molndal killing began earlier this month.

He had claimed to be 15 but was later found to have lied.

The court hearing the case is waiting for submissions from a team of psychiatrists before it issues a ruling, as the suspected killer claims to have heard “voices” encouraging him to commit suicide.

Sweden earlier this week toughened its rules for new asylum-seekers as well as for people waiting to join their refugee relatives in the country, after receiving 160,000 asylum claims last year.

The country has received 245,000 migrants since 2014 — mostly Syrians, Afghans and Iraqis.