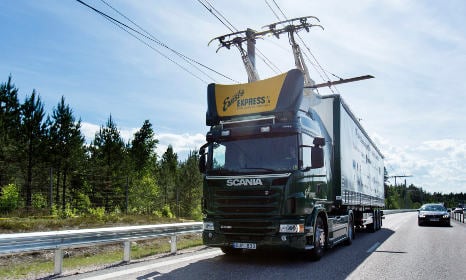 The truck draws power as it moves at speeds of up to 90km/h (56mph) while putting out no emissions. Photo: Scania AB

The “eHighway” is being used as a test site for battery-powered trucks that are charged as they drive beneath overhead wires, according to UK tech website, ArsTechnica.co.uk.

The technology is still in the trial phase but it allows specially designed trucks to draw power using “an intelligent pantograph.”

The truck draws power as it moves at speeds of up to 90km/h (56mph) while putting out no emissions.

The hybrid drive systems then allows the trucks to revert to diesel power when back on conventional roads.

Siemens is claiming that its “eHighway” is “twice as efficient as internal combustion engines,” cutting energy consumption by half.

As part of the country's commitment to a fossil-fuel independent transport sector by 2030, Sweden's transport government organisation (Trafikverket) wants to establish whether the Siemens eHighway system is suitable for future commercial use.

Transport accounts for more than one third of Sweden's CO2emissions, almost half of which comes from freight transport.

“By far the greatest part of the goods transported in Sweden goes on the road,” according to Anders Berndtsson, Trafikverket's chief strategist, “but only a limited part of the goods can be moved to other traffic types. That is why we must free the trucks from their dependence on fossil fuels, so that they can be of use also in the future. Electric roads offer this possibility and are an excellent complement to the transport system.”