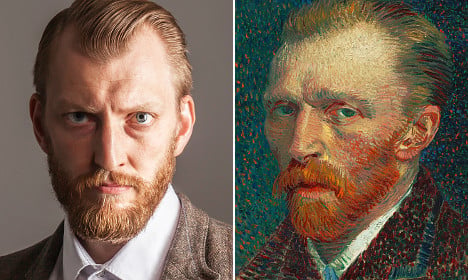 The best-selling Canadian writer Douglas Coupland is crowd-sourcing the globe for the world's foremost Van Gogh-alike. The winner's face will be 3D printed and cast in bronze for a sculpture of the Dutch master.

And Ivar Arpi, an outspoken leader writer with one of Sweden’s biggest newspapers, currently tops the Generation X author’s poll.

Arpi, who is detested by swathes of Swedish left-wing social media users, promised a delicious spectacle for his adversaries if picked.

“I’ll cut off my ear and broadcast it live on YouTube,” he told The Local, before confessing that he might have to discuss it with his wife first.

Arpi said Van Gogh was his favourite artist and people had often commented on the likeness over the years. So when he heard about the contest he submitted a picture, but hadn’t expected to soar to the top of the pile.

The winning entrant will be flown to Vancouver with a friend and will pocket €5,000. So what would he do with the money?

“I’d have plastic surgery and get the ear sewn back on,” said the Svenska Dagbladet journalist.

The Van Gogh bronze sculpture is the first in a series of Redheads on Douglas Coupland’s to-do list.

A website explaining the project describes redheadedness as “genetic magic”, a human mutation which is “a microcosm of the way in which all life on Earth changes with time.”

Arpi though admitted he wasn’t fully ginger — “my hair's reddish blond” — which might count against him when Coupland picks a winner.  And although the Swede has a huge lead among online voters, it’s the artist who will have the final say.

But Arpi won’t be too upset if he doesn’t win.

“I’m on parental leave and just need to keep myself amused,” he said.

If Coupland does choose him, however, he has vowed to bring his pet pug Bibi with him to Vancouver.

“She has always wanted to go there,” he said.