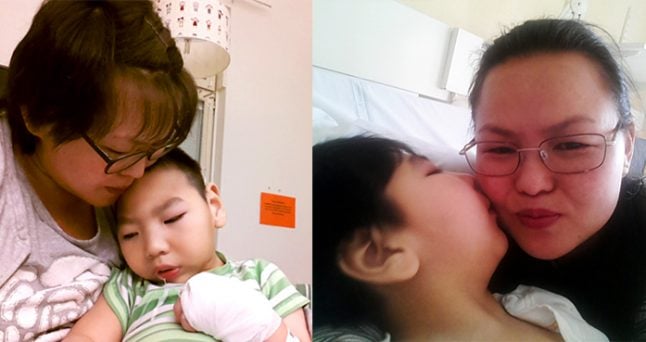 “My son’s story started during my pregnancy. I was pregnant with twins and everything was going fine until I started to feel a lot of pain, so I went to the hospital,” remembers Davaakhuu Barbaatar.

She gave birth to the twins at 46 weeks; sadly, one passed away, but the other, Batjargaal BulganErdene, survived.

Because Batjargaal was premature, Davaakhuu asked doctors if he could be kept in an incubator, but they told her he was healthy enough to be taken home. But after two months, she realized something wasn't right.

“He would cry excessively all night, but when I went to the hospital they said he just had a cold,” she says.

“Things didn’t get any better and when he was about four months old I decided to visit a doctor to check up on him.”

The doctors discovered that the baby's brain growth was abnormal compared to others of his age, and after an MRI, he was diagnosed with hydrocephalus – a condition where there is excess fluid in the brain, inhibiting its growth – and prescribed medication.

Davaakhuu spoke to multiple doctors to try to find out more about what her son was suffering from and how he could be treated. She contacted a group of visiting South Korean neurologists when he was eight months old, who carried out further check-ups on Batjargaal. The doctors said the initial diagnosis had been wrong: he had cerebral palsy, not hydrocephalus – and there was no longer any water in his brain, which had stopped growing.

“They told me he would never walk or run, my son was going to be handicapped,” says Davaakhuu. She kept in close contact with the doctors, sending updates and giving Batjargaal the medications they prescribed, which had to be imported from South Korea.

“The years didn’t pass smoothly,” says Davaakhuu. “I started to become melancholic and desperate, and tried to find solutions, alternatives. I wanted to help my son, it’s my dream to relieve his pain.”

This was when she began researching the possibility of moving abroad to give Batjargaal the chance of a better life. “I lost my faith in Mongolian neurologists when they failed to correctly diagnose my child, and in Mongolia it would have been impossible for my son to go to school and socialize with people.”

“I learned about how life in Sweden could change my son's life for the better,” she recalls.

“He was losing weight and I felt like he was dying in front of my eyes, he looked as if he was only half alive. I just couldn’t bear to see him like that”.

“I was spending hours on the internet, desperate to find solutions and alternatives. That's how I learned about the medical system in Sweden, and the mentality towards those with special needs. So my family and I decided to bring him to Sweden – whatever the cost.”

The whole family was smuggled to the Nordic country via Russia and Poland.

When they arrived here in July 2014, 6-year-old Batjargaal weighed only 12 kilos. Then an MRI test at Stockholm's Karolinska hospital revealed additional problems, including scoliosis, macrocephaly (an abnormally large head circumference), epilepsy and the fact that he was deaf.

“They made it clear that he can’t be cured, but with medication his symptoms could be reduced,” says Davaakhuu. The Swedish doctors prescribed new medication – and Batjargaal's symptoms began to improve, having fewer and less serious epileptic peaks. A PEG surgery, attaching a tube to his stomach so that he can get the nutrition he needs, has also helped him. Now aged eight, Batjargaal weighs 27 kilos.

She is convinced that Sweden is one of the best places to raise a child with special needs and give them the care they need. “There are specific routes and spaces in elevators, and almost everywhere, for people with special needs. We don't have that in Mongolia. In Sweden any kid has the right to study and go to school no matter what their health; then there is the advanced health care and the possibility to control my son’s suffering.”

Going to a school for children with special needs has been one of the best things to come out of the family's move. In February 2016, the family moved to Täby where he started school, which he attends from 9-3pm each day.

“He loves going to school, I can tell through his gestures and facial expressions,” says Davaakhuu. She also gets updates from the school on what he is doing and how well he is interacting with others.


The family on a boat on their way to Sweden, two years ago. Photo: Private

Typical activities offered by the school include wheelchair dancing and taking warm baths.

“It helps him relax his muscles and get really happy whenever he’s angry,” says Davaakhuu. “And he loves the white room in school. It’s an all-white room with a jelly-like bed which he lies on and the teachers shake it back and forth – he feels really happy and joyful there. The teachers use soft lighting with calm music, it’s a really good experience for him.

“My son will never see, walk or hear, but I would love him to be as happy as possible, and not suffering too much. I don’t want him to witness any more pain than he has experienced so far.

“He has one older and two younger sisters. He reacts to them, whenever one of them touches or kisses him. Everybody loves him a lot. We call him the king of the family.”