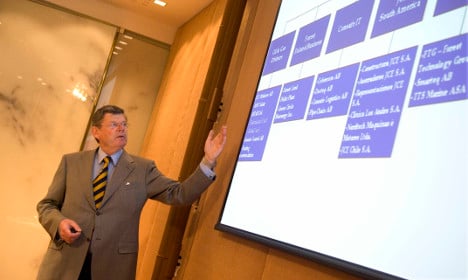 Christer Ericsson made his name and fortune in the late 1970s with the company Consafe, which provided offshore accommodation platforms before it went bankrupt in 1985. In recent years he had successfully mounted a comeback in the business world with the JCE Group.

Ericsson’s family confirmed his disappearance in a press release on Tuesday.

“It is with great sadness that we must announce that my husband/our father J Christer Ericsson has been missing at sea since Monday morning. Christer was at sea off Marstrand, and assessments indicate that during difficult conditions he fell overboard while on a fishing trip,” they wrote.

The alarm was raised on Monday morning after an individual found a boat drifting north of the island of Åstol, between larger islands Tjörn and Marstrand. No one was on board, but there was fishing equipment on the boat as well as fishing lines hanging in the water.

A total of 13 vessels, one rescue helicopter from the Swedish maritime authority (Sjöfartsverket) and a police helicopter equipped with infrared equipment have been involved in the subsequent search operation.

“All the information we have received indicates that there was only one person on board. Most indications suggest that a person fell overboard for some reason. The entire area in question and beaches have been searched without any findings,” Sjöfartsverket press officer Daniel Lindblad told news agency TT.

Police continued their search on Tuesday, with both marine police and a police helicopter involved in the work.

“As far as I know we haven’t received any tips that can lead us forward. The search will continue so long as the weather permits. We are working on the theory that it is an accident,” Ulla Brehm, information officer for the regional Västra Götaland police said.

In their press release, Ericsson’s family thanked the Swedish emergency services for their help and admitted that the chances of the businessman being found alive now appear to be small.