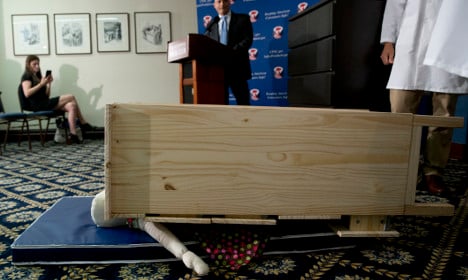 The Swedish furniture giant said on Tuesday that it was recalling more than 35 million chests and dressers in North America after six children died in the United States when they tipped over.

The recalled items are “unstable if they are not properly anchored to the wall, posing a tip-over and entrapment hazard that can result in death or injuries to children,” Ikea North America said in a statement.

“If you have, or think you have, one of these drawers… please act immediately,” said Elliot Kaye, head of the US Consumer Product Safety Commission (CPSC).

Speaking at a news conference in Washington, Kaye illustrated the tip-over danger by having personnel from his office use a 28-pound (13-kilo) dummy dressed as a young girl hang from the top drawers of Malm furniture.

The empty bureau tumbled down on the dummy in repeated demonstrations.

In Canada, where no fatal incidents have occurred, the authorities recalled dozens of models sold since 1993.

Customers in both countries can get full refunds, pick up wall-anchoring kits at nearby stores or have Ikea personnel come to attach wall anchors at no charge.

Owners were urged to immediately discontinue use of the affected products if not anchored to walls, and to move them to rooms not accessible by children.

In the three fatal incidents involving Malm furniture — made of particleboard or fibreboard — none of the items were anchored to a wall, the CPSC said. Seventeen others were injured in similar incidents.

Ikea also reported 41 incidents of tip-overs involving non-Malm furniture in the United States, resulting in deaths in 1989, 2002 and 2007. Nineteen more children were injured, the CPSC said.

At the company headquarters in Stockholm, Ikea group spokeswoman Kajsa Johansson told AFP that the drawers “meet all mandatory stability requirements on all markets where sold,” adding that the bureaus were “safe when anchored to the wall” as instructed.

Ikea has sold more than 147 million chests of drawers over the past 13 years, just over half of them — 78 million — of the Malm brand, the company said.

Prices for the items range between $70 and $200, depending on the model.

In 2015, Ikea launched a campaign in the United States and Canada to encourage owners of Malm furniture to anchor the pieces to walls.