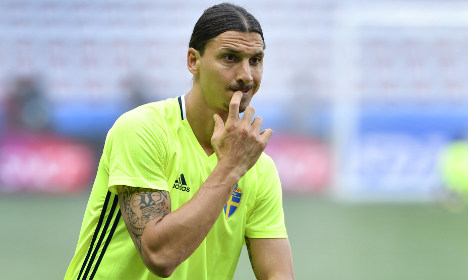 Ibrahimovic is on his way to Old Trafford. Here's everything you need to know. Photo: Anders Wiklund/TT

1. League titles but no Champions League crown
Ibrahimovic's goals have delivered league titles wherever he has gone from the Netherlands to Italy to Spain and France, but never has he touched the Champions League trophy. Inter Milan and Barcelona won it the season after he had left them.

United cannot give him it next season either as they failed to qualify, so he will just have to hope that they get a crack at it for the 2017/18 campaign and that he is still on the playing staff.

2. Carrot and stick approach needed for Ibracadabra magic
Ibrahimovic is such a contrary character that his coach at a previous club AC Milan Massimiliano Allegri says he needs constant attention if he is to be temperamentally ready to produce his magic turn on the pitch. “With him, you have to use both the stick and the carrot,” he was quoted in The Guardian in 2012.

“Ibra is a strong personality and needs to be relaxed at times, while in other occasions he has to be stimulated, otherwise he falls asleep.” Swedish national coach Erik Hamren called him out when he retired from international football in 2009 telling him do come back but not as the depressed donkey Eeyore but as Winnie The Pooh.

3. Opponents pay homage to 'God'
Fair to say Ibrahimovic through his exploits, his superstar appeal and lively temperament lit up a pretty moribund Ligue 1 for the past few seasons. To such an extent that even opposing clubs felt compelled to offer their 'thanks' for his presence, even if he hurt them by scoring goals against them.

Such a case was Toulouse, who would have pleased him with the divine being they compared him to given his penchant for adorning himself with epithets in 2014. “Today is your birthday, 33, the age of Christ, your son. Happy birthday and long live the Z! Despite the perverse pleasure you took scoring goals against us the last two seasons, we are not vindictive. We want to thank you. For everything.”

4. Bikes, bed and docks
No one can begrudge Ibrahimovic his riches given he has fought hard to rise to the top and at one point would have stuck with working on the docks in Malmö rather than attempting to carve out a football career.

His youth team manager at the time persuaded him to stick with the 'beautiful game'. Not that he needed a father figure, for despite his Bosnian caretaker dad splitting from his Croatian mother when he was just two, he spent more time with his dad Sefik, who nevertheless was badly affected by the Balkan War even though he had left Bosnia years before.

Ibrahimovic — who during his youth once stole a bicycle to get himself to training — related to The Guardian in 2014 a moving story about his impoverished father shelling out for a bed from IKEA for him. However, they had no way of getting it back home.

“We carried it home between us. It's fantastic what we did. I had time with my mother but I really lived with my father. One time he gave all his salary so I could travel to a training camp. He couldn't pay the rent but he did that.”

5. Literary Roth of God
Most footballer's autobiographies generally don't provide much insight or indeed entertainment, but Ibrahimovic's 'I am Zlatan Ibrahimovic' unsurprisingly bucked the trend. Not often in such tomes will you read anecdotes like this one about his companion and mother of his childen Helena Seger:

“She came from a model family from Lindesberg, one of those families where they say, 'Darling, would you please pass me the milk?', whereas we at table mostly we just hurled death threats at each other”.

Indeed one critic compared it to US literary legend Philip Roth's fictional biography Portnoy's Complaint, both about growing up as immigrants.