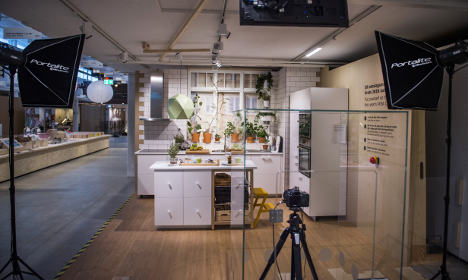 A scene from the museum in Älmhult. Photo: Emil Langvad/TT

Before the doors were thrown open, a marching band paraded through Älmhult, the small town in southern Sweden where the flatpack juggernaut opened the first Ikea store in 1958.

“We have a lot of stories to share,” museum manager Carina Kloek-Malmsten told AFP.

The company wanted the inauguration to be held in “a simple, Ikea way… no fireworks or glitter,” she added.

Around 1,500 people, many of them elderly, gathered outside the museum, where traditional Ikea snacks such as hotdogs and Swedish cinnamon rolls were on sale.

Per Hugner, a marketing manager at a Swedish company, said he had come to learn more about Ikea's beginnings.

“The entrepreneur behind the whole thing is what fascinates me a lot,” he said, referring to founder Ingvar Kamprad.

The 90-year-old Kamprad did not take part in the celebrations, though he was given a private tour of the museum several hours before the inauguration.

Although it has been accused of using an intricate company structure to avoid paying Sweden's high taxes, Ikea has often used Swedish egalitarianism as part of its marketing.

The museum entrance featured a large picture of Kamprad and the text: “To create a better everyday life for many people.”

Former employee Ann-Sofi Skoog said the “Ikea culture” and its “values” were part of the reason for its success. “It has enabled more people to afford a nice home,” she said.

The main exhibition of the 7,000 square metre (75,300 square feet) museum, built in what was the first store, starts with how Kamprad started the company.

Kamprad grew up in this poor region of southern Sweden and is known for his frugality despite now being one of the planet's richest people with 330 Ikea stores worldwide.

In the second part of the exhibit the company tells its story by displaying some of its most popular products through the years — and some less popular ones such as an inflatable sofa and armchair that had to be recalled after it emerged that they leaked air when people sat on them.

In the third section, customers share stories of how they used two Ikea staples: the Billy bookcase and the Klippan sofa.

In a small section titled “Learning from mistakes”, the museum also addresses some of the controversies surrounding Ikea, including Kamprad's ties to the Swedish Nazi party.

He has claimed he stopped attending the party's meetings in 1948, and once dismissed his membership as a “folly of youth”.

The museum displayed a copy of a handwritten letter by Kamprad to “the Ikea family” detailing what he called his “biggest fiasco” and outlining his links to Swedish fascist Per Engdahl.

“A part of my life that I bitterly regret,” Kamprad was quoted as saying on a sign.

Other “mistakes” include the revelation in a TV documentary that Ikea had bought rugs from a Pakistani factory using child labour, and a German publication finding dangerous levels of the gas formaldehyde in Billy bookcases.

But Sara Kristoffersson, a professor of design history at the University College of Arts, Crafts and Design in Stockholm, said that while Kamprad's past in Sweden's far-right movement had been discussed extensively in the country, Ikea had shied away from other controversial parts of its history.

“They think low prices are democratic, but you could (also) ask if that leads to overconsumption,” she told AFP.

It was also “problematic” that the company used an outdated image of Swedish egalitarianism in its marketing after years of rising inequality in the country, she argued.

“The Sweden they portray is a real whitewash,” she said.

“I don't think it would harm them (to raise such issues) because they have such a strong brand,” she said.

She added that the current set-up was “part of their marketing” and “not a museum.”