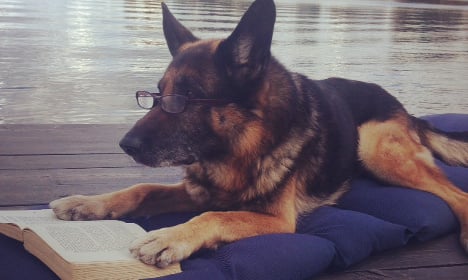 Äddie the police dog has finally retired after ten years on the job. Photo: Christer Torlen The post has struck a chord with the general public, being liked more than 26,000 times and drawing more than 800 replies on Facebook.

Christer Torlen, who was Äddie's handler at Stockholm Police, told The Local that he is a unique dog.

“He has worked for such a long time, yet all the time has been really energetic. He done his job for more than ten years, which is really unusual. I think the majority of police dogs don’t work for more than six, yet he done a really great job the whole time,” he said.

Over the course of his ten years on the job Äddie has been a narcotics dog, weapons search dog, and most recently, a patrol dog. His independent mentality earned him a reputation among staff, as well as a nickname.

“He got the nickname ‘Äddie No’ because he does so much through his own initiative. He’s very independent and sometimes can be a bit angry,” Torlen laughed.

“But because of that he has done so many great things. There are times when I’ve almost hindered him from doing a good job,” he explained.

“We were on a narcotics job once and he jumped up onto this huge boulder then started gesturing into the air. I looked at it, saw nothing was there, and called him down. I called him down three times, he kept jumping up on his own accord,”

“Then I looked beyond it and saw there was a woodshed where the wind was blowing down from. It turned out that the drugs were inside a nook in the roof. He had done exactly the right thing, he marked the spot and was right. He’s a really great dog.”

Replacing Äddie won't be easy, but the Stockholm police will have the help of his son, Zingo, who has just been approved as a police dog.

As for Äddie: it’s time for him to finally enjoy life as a pensioner.