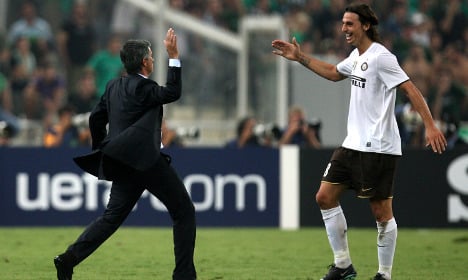 Ibrahimovic - who left French champions Paris Saint Germain at the end of last season - is reunited with Mourinho, under whom he played at Inter Milan. Photo: TT

The 34-year-old — who left French champions Paris Saint Germain at the end of last season having scored 156 goals in 180 appearances — is reunited with Mourinho, under whom he played at Inter Milan.

“I am absolutely delighted to be joining Manchester United and am looking forward to playing in the Premier League,” said Ibrahimovic, who will help bring back some much-needed swagger to Old Trafford, along with Mourinho.

“It goes without saying that I cannot wait to work with Jose Mourinho once again. He is a fantastic manager and I am ready for this new and exciting challenge.

“I have thoroughly enjoyed my career so far and have some great memories. I am now ready to create more special memories in England.”

Ibrahimovic, who has won 11 domestic league titles but never the Champions League, will not only be a crowd pleaser but also help the development of younger players, said Mourinho.

“Zlatan needs no introduction. The statistics speak for themselves. Ibra is one of the best strikers in the world and a player who always gives 100 percent,” said Mourinho, who along with Ibrahimovic shares an antipathy towards Manchester City manager Pep Guardiola.

“He has won the most important league championships in the world of football, now he has the opportunity to play in the best league in the world and I know he will grasp this opportunity and will work hard to help the team win titles.

“I am certain that his talent will delight fans at Old Trafford next season and that his experience will be invaluable in helping to develop the younger players in the squad.”

Mourinho has been tasked with making United realistic title contenders again after barren years under first David Moyes and then Louis van Gaal, who was sacked having delivered the FA Cup but crucially not Champions League football for next season.

Ibrahimovic, who hit 62 goals in 116 appearances for Sweden before retiring after a miserable Euro 2016, couldn't resist leaving France without a trademark burst of frank speaking.

“I wasn't expecting very much of Ligue 1 when I signed for PSG,” he told Sport & Style, a supplement to L'Equipe magazine.

“Ligue 1 wasn't up to my level nor of the clubs where I'd played before.”

“Its the simple truth. So there was clearly a risk to me, for my value, for my image,” added Ibrahimovic.

The blunt Swede, who aside from PSG and Inter Milan also played for AC Milan, Juventus, Barcelona and Ajax, said he had entered the unknown by joining a French league that lacked the passion and the glamour of Serie A.

He rounded the interview off with a typical flourish.

“I symbolised for a while Paris's image,” said Ibrahimovic, who had a poor Euro 2016, failing to score and quitting international football after Sweden's first-round elimination.