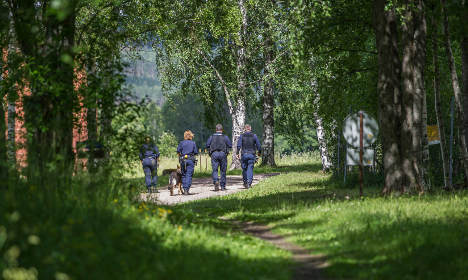 Four out of eight people arrested by police were remanded in custody on Sunday in connection to the suspected murder of a woman found dead near a stream in Långshyttan in Hedemora municipality.

One of them, a 20-year-old woman, admitted killing the older victim according to court documents seen by regional newspaper Dalarnas Tidning (DT). Her lawyer declined to comment when approached by the daily.

A 22-year-old man told Mora District Court that he had helped plan the alleged murder. However, he said he had then had second thoughts and left the scene before “the crime was started or completed”, reported DT.

A third man, 44, who was also remanded in custody on suspicion of murder, denied the allegations.

A 24-year-old man is understood to have confessed to being linked in part to the woman's death.

“He has admitted that he was involved, but I don't want to go into detail on what he admits. There will be an extensive investigation with many interrogations, and it will become a bit more clear what his role was,” his lawyer Carl-Oscar Morgården told the paper.

A total of eight people form part of the investigation, suspected of various degrees of involvement, including harbouring a criminal, accessory to murder and murder. Police initially arrested seven, but an eighth person handed himself over to officers on Sunday.

The woman was reported missing on June 28th by relatives in Borlänge and, after an initial investigation, police became convinced the woman had been murdered. They would not expand on why, but do not believe the victim was killed where she was found.

“There were many people involved, and it has been a long time, we think, since the crime was committed, so we have many places to explore,” said a police spokesman on Sunday.