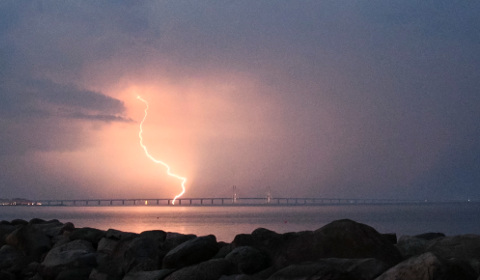 A thunder storm over the Öresund Bridge at the end of June. Photo: Johan Nilsson/TT

If you're planning a trip to the beach (and here's our pick of the five best ones) this summer, make sure you pack both an umbrella and sunscreen. At least if Sweden's weather forecasters are to be believed.

“It can be sunny one day and rainy the next, but it doesn't look like the weather will be stable. Above all there will be some showers. You could say that it's a very typical summer,” weather institute Storm's meteorologist Stig-Arild Fagerli told the Expressen tabloid, referring to the Swedish summer's notorious unpredictability.

July has only just started, and Sweden has already seen both sun and hailstorms. Swede Tobias Bader, who was caught offguard by the hail while visiting his mother near Örebro, told the daily: “I was sunbathing and the sky was almost clear. 25C, hot as hell! The sun disappeared behind a cloud so I sat up to get a new playlist sorted, then it started to pour down like heck. (…) Then it passed and the sun returned.”

The sun will continue to make occasional appearances throughout July. But blink and you'll miss it.

“This week the temperatures are generally quite good and there will be some warm air on Saturday. We could get 25C then, at least in southern parts of the Götaland region,” said Fagerli.

“It's going to be unstable with quite a few showers in the north this week. It looks unstable in all of the country for the rest of the month too. These are not the best holiday times,” he added.

But fear not. Sweden's biggest news agency, TT, asked meterologists on Tuesday for their expert advice on how sunbathers can predict the weather themselves.

“If you see so-called cumulus clouds, which look like balls of cotton, forming in the morning, it could indicate that there will be showers in the afternoon,” national weather institute SMHI's expert Marcus Sjöstedt told the newswire.

It was not immediately clear if that trick is how the agency gets the data for its weather app, which was used 84 million times by sun-starved Swedes between June and August last year, compared to 49 million times in December to February.

“We're working to improve the forecasts, but thunder and rain showers are difficult to predict,” said Fredrik Linde, SMHI's head of forecasts and weather warnings.