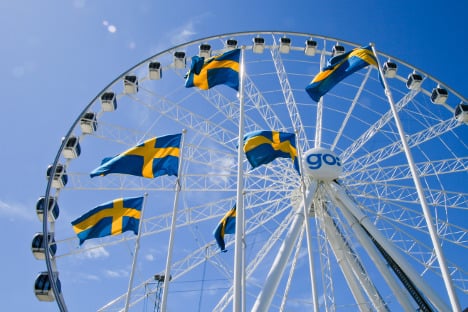 Sweden and France are worlds apart in some ways. Photo: Martin Jakobsson/ imagebank.sweden.se

1. Swedes are a pleasant bunch

Used to bored and upset faces when you ask for help? In Sweden, it turns out that pretty much everyone from the supermarket cashier, to the secretary at your university is pleasant and happy to assist.

OK, so they won’t be the ones starting a conversation with you, but once you’ve made that first step Swedes are surprisingly happy to chat. It’s no secret Swedes are very good at speaking English. Why? Mainly because they don’t dub English-language movies or TV programmes into Swedish, adding subtitles instead. Then there is their habit of taking gap years between high school and university, which allows them to improve their language skills.

No strikes, no demonstrations… Swedes don’t protest. At least not in the French way.

Swedes have a history of negotiating and compromising. That’s how they went from an absolute monarchy to a democracy, and how they implemented universal suffrage. No revolution, no bloodbath.

Swedes don’t try to challenge the rules for the sake of it. They comply. They don’t try to force their way onto a bus without a ticket, shops don’t need a mountain of CCTV cameras, and when people are in their car, they may even stop to let you cross the road once in a while.

4. Equality and respect are important

Mandatory paternity leave, taxes based on each individual in a couple rather than the couple as a whole… Sweden is at the front of the pack when it comes to gender equality. But the most striking thing is how that equality plays out in everyday life.

Harassment on the streets isn't a common sight. Men and women often share the same bathroom. One gender is not given a greater weight than the other, and discussing gender equality is far from taboo. Then there's sexuality. Whether you're homosexual, bisexual, transgender, or want to be called by the neutral pronoun “hen”, it doesn't matter. Everyone respects you.

READ ALSO: 'How moving to Sweden made me more feminist' Swedes all have a personal identity number, which makes every one of them traceable. Whether you're a politician, a rock star, or a cashier, all of your information is gathered on, to mention but one example, the website hitta.se, from phone numbers to addresses, or the real estate price in your neighbourhood. You can even send flowers via the site.

Swedes use their personal number for just about everything: phone subscriptions, train tickets, registering for university. For a non-Swede, it can be a bit scary at times.

6. You’re sick? You might have to wait a little…

In Sweden, you don’t have a family doctor like we have in France. Instead, you have to wait for hours in a queue at your local medical centre (vårdcentral). And don’t expect to be taken care of quickly unless you've had a fever for a week and are throwing up all over the place.

As for antibiotics: in Sweden, those are a last resort.

In France we love our traditions, but there are nowhere near as many as Swedes have. Midsummer, Valborg, Christmas, Easter…  when Swedes celebrate,  they don’t do it in half measures.

Expect big family meals with singing, dancing, and litres of alcohol. Swedes like a party more than you may think. 8. Being naked is no big deal

During the aforementioned Midsummer celebrations it is common for Swedes to go skinny-dipping in the nearest body of water. No prudes to be found here. Whether it's in the changing rooms at the gym, or in the sauna, Swedes see no shame in getting naked right in front of you.

9. University is relaxed and accessible

Probably the most striking point on the list. Swedish students are effectively paid to study. They benefit from a state student loan, and can receive around 1000 euros a month ($1114) in the form of a grant.

Unsurprisingly, students are relaxed (at least more than in France). They have fewer courses (though technically more work at home), they are informal with their teachers, and if they don’t pass a course they simply go and re-sit the exam (and people don’t really care). 10. Cash is almost extinct in Sweden

In Sweden virtually everything is paid for by card. Physical money has been almost forgotten about: the equivalent of a cent doesn't even exist in coins anymore. As a consequence, few still bother to withdraw money, and it isn't unusual to see a young Swede without any cash on them at all.

What's more, after the invention of quick bank transfer app Swish, you can simply “swish” any money you owe your friends over to them instantly at the touch of a button.

When you meet a Swede for the first time, you shake hands. Later on, you can hug. But whatever happens, DO NOT kiss them on both cheeks. Ever. It will just scare them.

READ ALSO: 'Why I can't embrace the Swedish hug' 12. Plan your drinking in advance

Looking forward to buying your bottle of wine in the supermarket? Nope. In Sweden, drinks that contain more than 3.5 percent alcohol can only be purchased at state-owned alcohol monopoly Systembolaget. And you have to be over 20. And it's closed on Sunday.

13. The day is different

It feels like Swedes do everything earlier, because they do. They eat lunch at 11, and dinner at six. They close shops at 7pm if you're lucky, and finish their parties at two in the morning. Pretty early when you’re used to partying until 6am.

What’s wrong with doors in Sweden? First, they open in the opposite direction. Secondly: don’t wait for a Swede to hold them for you. You'll be waiting all day.

Marie Zafimehy is a French exchange student currently interning with The Local. Follow her on Twitter here.

READ ALSO:  Eight things that shocked this Brit about Sweden