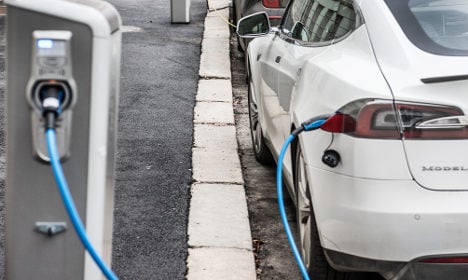 Despite Sweden being famous for its focus on environmental issues, the sale of electric car use has been slow to shift into top gear. But a car maker has told The Local that it is hoping its new scheme, using the sharing economy to boost the sale of its own green-friendly vehicles, will take off among tech-savvy Swedes.

“Electric cars is a reality, but even though it's year 2016, a year when environmental issues are a big topic, the infrastructure is lacking,” Renault spokesperson Lars Höglin said in a statement announcing the launch of the company's new scheme Elbnb, a website that allows Swedish drivers help each other charge their cars.

“The primary goal of Elbnb is to raise awareness of the lack of charging infrastructure,” Höglin told The Local on Wednesday, citing a survey by the company where 51 percent of respondents said that they found the lack of charging points one of the biggest obstacles of driving an electric car.

The scheme lets drivers pin electric charging points at their homes on a map, allowing other drivers to contact them to get help filling up. Together they then agree on a time and cost of the electric charging.

If the concept sounds familiar, it is because it is. The name, in which 'el' is short for 'electricity', is inspired by Airbnb, a website that allows individuals to rent their home to other users.

“The name immediately tells people what it's all about. People are aware about bed and breakfasts and about Airbnb. We think that Airbnb has created something amazing, so it's also kind of a little tribute to them,” says Höglin. A map showing some of Elbnb's charging points in Sweden. Photo: Elbnb/Renault

The map, which also shows official charging points, counts 50 users since it launched three weeks ago.

“We have increased the amount of charging points in Sweden by four percent in only this three-week period,” says Höglin.

He hopes the project can next branch out to other countries, with Norway potentially being top of the list since it is “one of the biggest countries concerning electrical vehicles”. Nothing is yet set in stone.

“Environmental questions are a big topic in Sweden, so that's also the reason why we did it in Sweden.”

Höglin reveals that the scheme seems to be fuelling Sweden's 'fika' [coffee and cake] trend as well.

“I saw a user the other day saying that if you stop by, you can come for a coffee as well. So it's turning into a social network.”