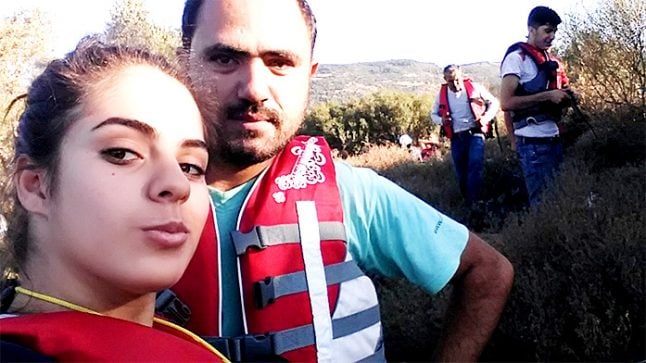 “I had to leave. Everything around me intensified my feeling of disgust: the war back home, the contempt and disrespect that Syrians face on a daily basis in Lebanon and elsewhere – we were seen as a burden,” she says.

During the summer of 2015, al-Kerdy was working in one of Beirut’s supermarkets to fund her university studies. Her shifts lasted around 12 hours each day, including Sundays, and she earned $500 per month.

She says that Lebanese citizens who spoke English worked as cashiers for six hours a day, with Sundays off, for $600 a month, but because she was Syrian the supermarket refused to hire her on the cash desk, despite the fact that she spoke English.

“I felt like I was stuck in a dead end, so I decided to leave Lebanon. I decided I had to either live the way I wanted or die,” she recalls.

“I had no third choice because of my situation. What was the greatest horror that I would face? Death! That was no problem for me, so it was either that – or I would get what I wanted.”

On July 20th 2015, at the supermarket where she was working, al-Kerdy had an experience she describes as an “omen”. She got talking to a customer from Greece, and asked him for tips on getting to Europe.

“He told me: ‘Choose the right time. The best time to do it is August 20th.’ He said the weather would be at its best by then. I don’t know why but talking to that man felt good; maybe he was sent from God.”

Once she had saved enough money to pay for flights to Turkey and a smuggler, al-Kerdy left Lebanon, along with her uncle.

Refugees without proper documentation are generally not able to travel into the EU by air because of airlines' concern about carriers liability under a European Union directive. This measure makes airlines financially liable for all costs related to returning travellers who do not end up being able to stay and must go back to their countries of origin.

Anwar and her uncle managed to get in touch with a smuggler who promised to help the pair cross from the coastal city Izmir to Greece, but it was a a scam, and no boat came.

After a few nights of worry, and a trip to Istanbul, their luck changed, and al-Kerdy and her uncle reached Lesbos on a boat from Istanbul on August 28th.

“The journey took us an hour and a half, and the sea was amazingly calm and with no waves,” she says. “At first I didn’t believe that I was finally in Greece, I was so happy it had worked.”

But the rest of the journey proved more difficult. Greek customs officials said that only families could be transported by bus to Mytilene, the city where they could register themselves and get documents to stay legally in Greece – everyone else had to walk.

The journey from Lesbos to Mytilene takes three days on foot, and the refugees were exhausted and were not allowed to pay for buses or any other transport.

Al-Kerdy threw away most of her clothes from her backpack; they were heavy, and she felt faint in the Greek sun. She called an aunt who was living in Greece, whose advice was to find a taxi and offer extra money to be driven to Mytilene.

“After walking for two hours, we found one. The driver said he would drive us to Mytilene but on two conditions: we each had to pay €50 and if the police stopped us, we would say that I fainted and he was driving us to the hospital. We accepted the deal because we had no other choice.”

Another two hours later, they arrived at the destination. It was crowded: a passerby told al-Kerdy there were over 16,000 people on the small island, and there were long queues to get papers issued.

It took a week to get documents allowing them to stay for three months in Greece and move on to northern Europe, and on September 5th, the group moved to Athens.

Al-Kerdy separated from her uncle and headed to Malmö, Sweden, where she arrived in November after crossing Macedonia, Austria, Germany and Denmark.

“After arriving in Sweden, I spent two weeks in total depression, I couldn’t understand what happened or how I ended up here. It took me a while to recognize that I was living in Sweden,” she recalls.

Since arriving, she has settled in and now works as a babysitter, walking the children to school, feeding them, and looking after them in the evenings.

“I have dreamed of sharing my journey and pictures with people, to let them see and understand what we’ve faced. Especially for girls, the journey can be harsh and unbearable. The majority of refugees were men, and I felt like I'd lost part of my privacy, for example, I couldn't find a place to shower.”