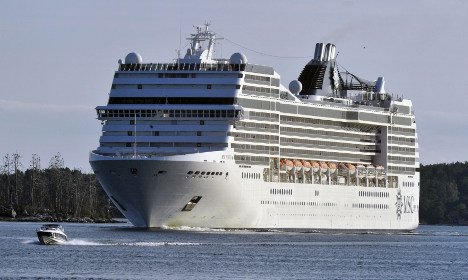 A file photo of a ferry in Sweden. Photo: Hasse Holmberg/TT

More than 150 refugees in total were smuggled from Austria to Sweden by a criminal organization with strong links to the Gävleborg area in central Sweden.

The refugees were then housed in a rented apartment by the Swedish trio, before being moved on to Finland via passenger ferries and flights.

“They rented an apartment in Gävle where the refugees lived temporarily until there were so many of them that they were jointly transported to Finland,” Finnish Border Guard investigation leader Rasmus Friman told P4 Gävleborg.

The refugees paid large sums of money to the smugglers, who in total earned around 2.5 million kronor ($292,024). The Swedes were arrested by Finnish police for involvement in human smuggling last year.

A Finnish district court has now handed them prison sentences for aggravated facilitation of illegal entry.

The father was sentenced to five years in prison. One of his sons received a three-year prison sentence, while the other was given a suspended sentence of one year and eleven months.

Two other men were also sentenced for their involvement in the crime.