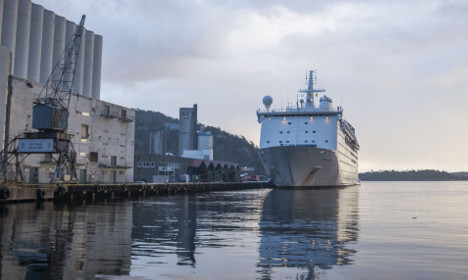 US-based Swedish shipping magnate Floating Accommodations filed the complaints about Härnösand municipality, which denied the ship the right to reside at Utansjö port on the country’s easy coast.

Sweden had signed a deal with the shipping firm to lodge 1,800 asylum seekers aboard the Ocean Gala. But on July 7th, the country’s migration board Migrationsverket cancelled the agreement, saying it was “null and void” after the owners of the ship had failed to secure the permits it required.

The migration authority also rejected the company’s request that it should be paid 800,000 kronor ($93,786) per day to cover the rent of the near 2000 places on the ship.

Floating Accommodations now argues that the Härnösand municipality – which vetoed hosting the ship  – had campaigned against them to stop their project.

“The real offender is the authority, which used funds, an abuse of power, threats, official contacts and harassment otherwise only seen in old gangster movies,” claimed the company's complaint filed to the Swedish Parliamentary Ombudsman.

In April, Sweden's migration authority accepted Härnösand municipality's right to veto hosting the Ocean Gala in the Utansjö port. But in June, Floating Accommodations chose to dock the ship in the port anyway, arguing that planning permission was not required.

Härnösand municipality then reported the owner of the port to the police, saying that it was not entitled to host the ship.