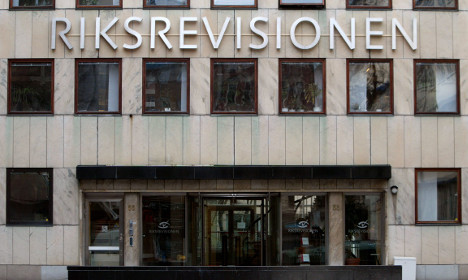 The auditor is tasked with making sure that Sweden's parliament receives a coordinated and independent audit of state finances, while it also “contributes to the democracy of other countries through international assignments,” according to its website.

In a series of articles which began last week however, Dagens Nyheter (DN) reported that Riksrevisionen's Auditors General Ulf Bengtsson and Margareta Åberg appeared to have bypassed strict rules the office must follow as a reviewer of public authorities.

On Monday, the chairman of the auditor’s advisory council, Social Democrat MP Jörgen Hellman, labelled the events as a “serious crisis” for the authority.

On the same day, the Swedish branch of anti-corruption campaign group Transparency International called for all three Auditors General appointed to the authority to make their seats available.

One already has. On Friday, Ackum announced that she would not continue in her position because she felt she had made a mistake that could not be defended in the role she was tasked with.

Ackum tendered her resignation before DN published information on how she allegedly recruited former colleagues in the Swedish cabinet office to the State Auditor, giving them high salaries and tailoring job advertisements for them so that no other candidates would merit consideration.

She also allegedly allowed third parties to influence audits, according to DN.

The Swedish Union of Civil Cervants (ST) blasted the authority in response to the reports. The union – which represents employees at the Riksrevisionen – on Monday expressed its belief that confidence in the authority's independence and objectivity as an examiner has been “seriously damaged”.

In a press release, ST’s chairperson Britta Lejon demanded that the Swedish parliament's constitutional committee act “promptly” in response to the scandal. The parliamentary committee is tasked with appointing and dismissing the Riksrevisionen’s three auditors.

The constitutional committee’s chairman Andreas Norlén meanwhile said that he and the committee’s deputy chairman Björn von Sydow are now planning a special meeting, the details of which will be announced over the course of this week.

“I think there would be a value in the whole committee receiving information from the State Auditor over what happened, and for the committee to discuss internally and assess the situation,” Norlén told TT.

Hellman, who leads the Riksrevisionen's parliamentary advisory board, said that the board would hold an extraordinary meeting in response to the scandal this Wednesday.

“In our role we will try to produce a plan where the auditors can demonstrate how they can restore confidence once more,” Hellman told news agency TT.