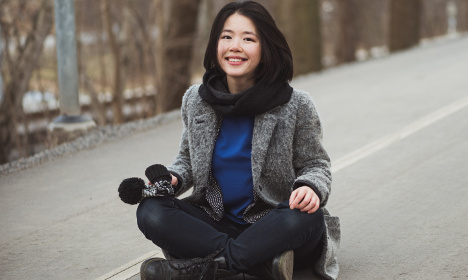 From sneakily carving out her own rubber stamps behind her teacher’s back in China, to teaching the art of printmaking, stamp-making and lino-cutting to her own students in Stockholm, Tian Gan has come a long way.

Her story starts in Chongqing, a city she describes as “big, even by Chinese standards”. That’s something of an understatement: with more than 30 million inhabitants, Chongqing’s population is more than three times larger than Sweden’s. It was at a school in that metropolis that she began shaping her Scandinavian future without even realizing.

“I started making the stamps for fun when I was a kid, basically because I didn’t want to listen to my teachers,” she laughs. “I watched a lot of Friends in high school too, so I spoke enough English to go to the best English department in China, where I studied English literature”.

When it was time to pick a university subject, Gan decided to study English literature abroad. Instead of going to the United Kingdom however, she chose Sweden, which at the time still offered free tuition to non-EU students.

It was while she was still in the middle of her studies in Stockholm that an offer to do a favour for a Swedish friend sparked an idea that later became her business.

“My friend makes baby jewellery here and sells it on (e-commerce site) Etsy. I offered to make her a logo stamp for her packaging. She loved it so much and said it was perfect, and that’s how it started,”

“The eureka moment was when I realized I could make money. As a student you don’t really have much, so I was amazed.” Gan’s passion remained more or less a hobby until her studies finished, at which point she had to come up with a reason to stay in the country she had grown to love.

“I hadn’t even considered doing it full-time. But then the logistics of trying to figure out how I could stay in Sweden came up. Starting a company seemed to be the smartest way.”

“I went to the local Nyföretagscentrum [centre for new business owners] and they gave me so much information. They had very specific help, even for a creative business, which was a big push to make it happen. So I started with small stamps, then made bigger and bigger stuff.”

Gan started to share her artwork more on the internet, and that quickly caught the interest of people in Sweden. Several soon asked her if she could teach them her craft, so eventually, she did.

“Printmaking isn’t as popular here as it is in the UK. If you do the maths, you won’t make enough money out of it as if it’s sold elsewhere in the world, because the price would make it a luxury,”

“So not a lot of people are doing it, and as such I posted lots of stuff on the internet to stay active. I got a lot of people responding asking for workshops, which made me think. I happened to have a friend who has a Lego shop in Stockholm, and he said I could hold workshops there. It was a dream come true.”

The Lego shop in question is owned by James Gill, a Brit who The Local previously interviewed for My Swedish Career. It is from his store on Stockholm’s Södermalm island that Gan has been offering both newcomers and more experienced designers the chance to learn how to carve their own stamps throughout July. Initially she was concerned about how much interest there would be during the height of the Swedish summer, when Stockholm residents traditionally flee the city. She needn’t have worried.

“For a long period of time after I started marketing it only three people had signed up. As I had at least one person I didn’t want to cancel, but I thought ‘this is going to be super embarrassing’.”

“Then, word got out and bang, bang, bang, people started registering. They found me on Meet Up, Instagram, Facebook. And the original people that had said ‘if you have a workshop sometime I’ll sign up’ actually did. How often does that happen?”

For the printmaker, teaching has been a surprisingly inspiring experience, particularly when one unusual technique resulted in the production of a truly unique piece.

“One Swedish lady who came had a condition which meant her hand was shaking quite a lot. I had said at the start of the class ‘there aren’t any tricks apart from a steady hand’, and she replied ‘well what can I do?’. I explained to her that her lines would be different, but they would be more unique to her.”

“In the end she created an amazing piece. I was so impressed and happy, and so inspired.”

It hasn’t all been clear sailing however. While the entrepreneur says that the classes and her printmaking are hugely fulfilling, that doesn’t mean that running her business is without its challenges.

“I think there could be more thought here about how to balance a Swedish and international market for small companies like mine. Price wise, having to pay VAT is a massive thing. I have to think about that all the time, which makes the money side of things a lot harder.”

“Then there’s importing the rubber I use in my workshop, 70% of which comes from the UK or the US. That’s expensive, and one selfish reason behind having the workshops perhaps is to get people interested so shops here start selling the stuff.”

Gan also thinks Sweden can be something of a tough country to network in for those working in the creative industries.

“I don’t think Sweden does very much for us on that front. I have a couple of friends who are also designers and we talk about the logistics of running a business, but apart from that, I don’t get enough chances to meet enough creative people or feel any sense of community.” As for selling her products, she feels Sweden leaves a lot to be desired in that area, too.

“We do have Nordic Design Collective, a site similar to Etsy, but overall if you compare the same kind of e-commerce platforms in Sweden with ones abroad, there’s no competition. Even if Sweden has the world’s best internet as people claim, e-commerce is still pretty backward here.”

Challenges clearly exist, but instead of succumbing to them, Gan’s plan is to use her own background to her advantage, in an effort to take her business forward.

“The manufacturing industry is tough here, cost-wise. That’s why everyone is making trays, you can’t really make much else in Sweden as you look into your options and the cost is high, there’s very little variety compared to China.”

“So in the long run I want to manufacture some stuff back in China to keep the costs down. But I also want to keep opening up the Swedish market and continue with the workshops.”

Those are long-term goals, and Gan’s short-term targets are to keep her workshops running, get her products into a major convention in Sweden, and collaborate more with other creative people.

“Along with the workshops I’m doing I want to do some linocut workshops too. Then, in the next year I want to get into Formex, which is the design convention being staged in Stockholm.”

“I want to create some pattern designs and print them on products. I’m meeting a ceramics artist who has a lot of experience with having workshops who wants to collaborate after seeing me on Instagram. So things are happening. I’m very excited.”

After looking back on her work and her teaching, Gan reluctantly admits that she has already achieved a lot if her unlikely starting point is taken into consideration.

“Intellectual property isn’t hugely respected in China, so if I did what I’m doing there I couldn’t make a living. As for Sweden, most Chinese students come here to study medicine, chemistry or IT.”

“Perhaps I should think of myself as more non-conformist than I do! But really, what I would say is that if you’re thinking of doing something others haven’t done before, don’t worry about it. Do it. Otherwise you’ll never know. That’s my take.”