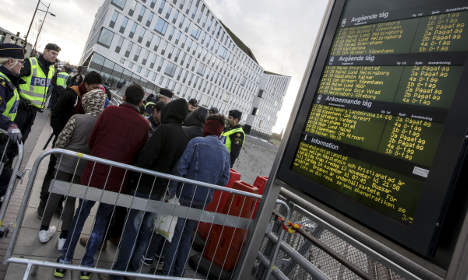 Asked whether refugees make their country stronger because of their work and talents, 62 percent of Swedish respondents agreed with the statement, the highest of any nation surveyed.

Germany produced the second highest number of respondents in agreement with that statement, with 59 percent, while both Greece and Hungary had the lowest at nine percent.

Sweden also produced the highest number of respondents (36 percent) who said that having an increasing number of people of different races, groups and nationalities makes their country a better place to live, though more Swedes (38 percent) said it doesn’t make much difference either way.

Sweden was one of the EU states that took in the highest number of refugees per capita during the height of the refugee crisis in 2015, receiving a record 163,000 asylum requests that year.

Issues around immigration are a major talking point in the Scandinavian country at the moment, and answers in other parts of the Pew Research Center survey show just how varied and divided Swedish opinions on refugees can be.

When asked whether refugees were more to blame for crime in the country than other groups, for example, 49 percent of Swedes said they were not, compared to 46 percent that said they were.

The 46 percent of Swedes that said refugees were more to blame for crime in the country meant Sweden produced the second highest proportion of respondents of that opinion however, trailing only Italy (47 percent).

Attitudes towards jobs and welfare in relation to refugees were far clearer. Only 32 percent of Swedes said they think refugees are a burden on their country because they take jobs and social benefits – well below the median of 50 percent – and the second lowest behind Germany (31 percent).

Sweden had the lowest number of respondents meanwhile (26 percent) who thought that sharing Swedish customs and traditions is “very important” in order to be truly Swedish.

Perhaps unsurprisingly in famously secular Sweden, adhering to the country’s dominant religion also appears to be of little importance for many. The majority (57 percent) said that being Christian is “not at all important” in order to be truly Swedish, the joint highest proportion of respondents from any of the nations surveyed to provide that answer.

The Pew Center’s survey was conducted between April 4th and May 12th 2016, and took in the opinions of 11,494 respondents.