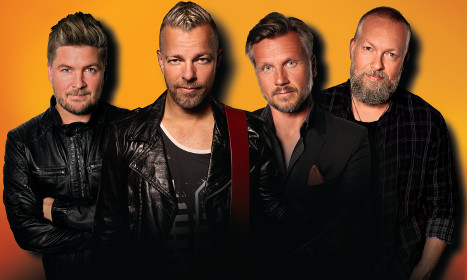 Or rather, its new chill-out hotline. That’s exactly what 90s pop heartthrobs Arvingarna have launched. The Gothenburg band, who were Sweden’s Eurovision entry in 1993, have launched a new number that fans can call in order to get some sagely advice from the group on heartbreak, problems at work, and even the quest to attain the elusive perfect beach body.

Naturally, The Local gave it a ring, and after picking option one for advice on heartbreak (of course), we were connected with singer Casper Janebrink. Who better to give us some guidance on our romance-related anguish?

“It’s all done with a bit of a wink in our eye,” he explained.

“We have four different categories people can ask us about. I handle the love problems, then there are problems at work, problems at home like ‘who does what in the house?’, and then the beach body 2016 one, where you can get some training tips.”

The singer said he doesn’t expect to receive too many serious queries, and so far fans have taken the initiative in the light-hearted spirit with which it was intended.

“If someone has a real problem we’ll try and help with our own life experience as best as we can, but I don’t think people will ring with big concerns. It’s more about ringing about fun stuff. People call, ask a question as a bit of a joke, and we try and help with an answer.”

Probed on whether there have been any memorable calls so far, the 46-year-old mentioned one man who wasn’t actually a fan of the band, but was instead looking for some advice on how he could surprise his wife.

“He called up yesterday and explained she has loved the band for years and wanted to do something romantic for her. So he decided to perform one of our songs for her, and wanted to know which one he should choose,” Janebrink laughed.

“I told him he should take the song ‘Räck mig din hand’ (Give me your hand) from 1994. Play that one for her, and I think you’ll make your wife happy, she’ll take your hand and you’ll have a nice evening together.”

The idea for the number came from Arvingarna’s record company, who thought it could be a unique way to publicise their new single, as well as allow fans to get in contact with them.

“We have a song out called ‘Chilla Ner’ (Chill-out) so the record company thought this could be a good way of getting the word out,” Janebrink explained.

“We also want to help people relax and have a nice summer. It’s a simple thing we can do.”

Tempted? You can try the number for yourself on 0046 771 24452. If the band isn’t busy rehearsing (they’re currently on tour) then you may be able to get some heartbreak help, first-hand.