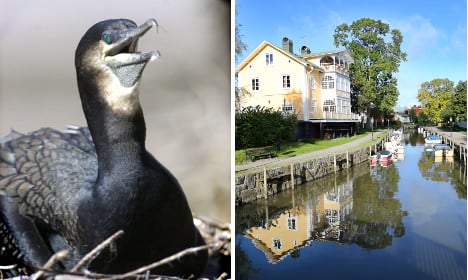 Barbro Westerberg, who lives in the central Swedish coastal town of Trosa, told The Local that the smell of faecal matter blowing in from the nearby island of Snöholmen is so bad that it is affecting local tourism.

“There are 300 cormorant nests out on the island. The birds' droppings are damaging the trees, and the smell is bad, so bloody bad. When there is a wind from the south or southwest you get that smell blown in over the whole neighbourhood,” she explained.

“There are many restaurants here that are only open in the summer, and they’re losing out. People can’t sit outside and eat.”

In response, Westerberg has launched a Facebook group called “Save Snöholmen” (Rädda Snöholmen), encouraging residents affected by the scourge to sign up so that she can put a proposal forward to the local council for a cull.

“I’ve spoken to the council, and they need grounds to approve a shooting in the autumn. Last year they put in a request to shoot 50 and it was approved by the municipality, but ornithologists and the Environmental Protection Agency appealed the decision and it was stopped.”

Almost 600 people have signed up to the Facebook group since it was created in June, and several comments on the page point out the pungent problem.

“The wrong wind was blowing last night and a really bad smell passed into people's houses. It’s pretty bad that an island can create that kind of odour for everyone living in a nearby town,” Maria Kullberg wrote.

“I took the boat out today and photographed Snöholmen. It reminded me of the Hitchcock film 'The Birds' but with a smell. Ugh, how terrible. Trosa will soon become a rubbish town where the wind blows in the wrong direction,” commented Calle Bodin.

Group organizer Westerberg says she hopes something can be done before the poo problem becomes worse.

“I won’t gain anything from this personally. I’ve been retired for five years. If they were out at sea it would be no problem really, but there are 300 nests on that island, with four to six eggs in each. If only three of them hatch, you can work out how many that is. It’s absurd.”

“I want them to reduce the number. How do they do that? I don’t know. A lot of people say they should just burn the whole thing down and start from the beginning.”

Earlier this year The Local named Trosa as one of our little-known Swedish towns to look out for.