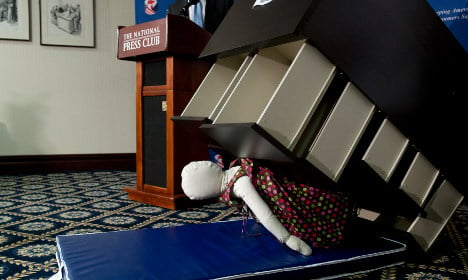 US experts demonstrating last month how the drawers could kill a child. Photo: AP Photo/Carolyn Kaster

The Chinese government said in a statement that the furniture being recalled could fall over if not properly fixed to the wall, possibly causing injuries or death to children.

It comes two weeks after Ikea announced that it was recalling more than 35 million chests and dressers in the United States and Canada as regulators said six children had died in accidents.

China's General Administration of Quality Supervision, Inspection and Quarantine did not say whether any accidents had occurred in China involving the furniture being recalled.

The recall includes Ikea's 'Malm' line, said the government agency, which published a detailed list of items, which were made between 1999 and 2016 and include imports.

In a statement on its website, Ikea apologized to Chinese consumers.

“Product safety, especially the safety of children, has all along been the focal point of Ikea's work without any compromise. We consistently hope consumers will be assured the Ikea products they buy are safe to use,” it said.

The company is offering to provide free wall fittings and installation to customers with affected furniture or full refunds, its statement said.

READ ALSO: Why these Ikea drawers can result in death

Six children died in the US when furniture toppled over, according to the country's Consumer Product Safety Commission. No fatal incidents have occurred in Canada, according to regulators.