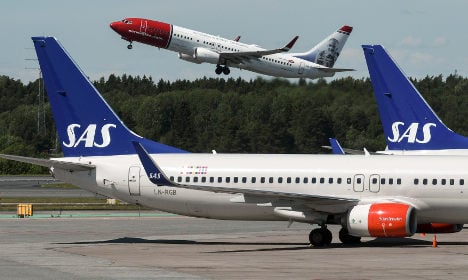 They often get a lot of bad rap for packing passengers like sardines, not allowing you to bring an extra bag on board and dubious remarks on the attractiveness of Swedish women (oh sorry, that was just the one).

But low-cost airlines have one thing going for them: they are greener than their pricier competitors. At least according to researchers at the Royal Institute of Technology (Kungliga tekniska högskolan, KTH) in Stockholm, who compared aircraft models, passenger figures and carbondioxide (CO2) emissions data.

“The low-cost companies pack their planes with the most travellers. You then get less CO2 emissions,” researcher Andreas Schenning told the TT newswire. He led the study together with Joel Larsson of the university's civil engineering and teaching course.

The pair also advised people to invest an extra few kronor on direct flights where possible, instead of doing the old Schiphol-via-Charles-de-Gaulle-and-Roma-Fiumicino-to-Arlanda loop (or something like that) so familiar to European expats and business travellers.

The study found that stopping in Copenhagen on a flight from Stockholm to Munich increases CO2 emissions by 35 percent per person.

“Many airlines take detours and are still cheaper. But the environmental damage is much greater,” said Schennings. But he added: “Take the train instead if you want to spare the environment.”

The researchers have now created an algorithm helping users to also calculate their carbon footprint on Swedish site flygresor.se, which compares prices and fastest journeys.

The study was based on data from flygresor.se about airline models and destinations, airlines' own annual passenger statistics, EU fuel consumption data, and airline models and the number of seats, adjusting some figures upwards to take into account the combustion of fuel at high altitudes.