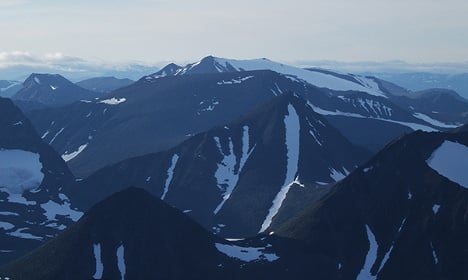 Sweden's Land Registery (Lantmäteriet) used lasers from an airplane to discover a new peak of over 2,000 metres in the Swedish mountains. The mountain of Sielmatjåkka – which lies north of the country’s highest peak Kebnekaise – has now proven to be seven meters higher than previously thought.

For at least a century, mountain people and navigators were convinced that Sweden had only eleven mountain peaks, seven of which surpassed the mythical 2,000 metre mark. But the Land Registry’s laser scanning has now revealed that Sielmatjåkka is a 12th mountain peak, with a height of 2,004 metres.

“We had our suspicions about this peak, and when I opened the file with the laser data so that the program could start to build the high contours, I saw that the 2,000 metre curve was passed,” Olander explained, admitting he felt slight euphoria upon the discovery.

Sweden’s newly grown mountain is now known to be the northernmost with a height of over 2,000 metres within the country's borders. Another mountain, Palkattjåkka in southern Sarek, gained 14 metres in height thanks to laser scanning, while several other high peaks were found to be slightly lower than previously estimated.

The Swedish Land Registry is treating the new height records as a bonus from gaining greater knowledge in a broader context.

“The main benefit of laser scanning is that we get a comprehensive elevation model of Sweden, with a height accuracy to within half a metre. The model can be used for environmental and climate adaptation in flood-prone areas, for example,” Olander said.

The whole of Sweden has not yet been fully scanned, but the work will be finished during the year. There could be new surprises in store therefore.

“We know that there are more mountains that lie on the border, like Kåtotjåkka, which is north of Sielmatjåkka. According to maps it is 1,991 metres tall, but that area hasn’t been scanned yet,” Olander noted.

Swedish mountain mappers are accustomed to variation. The height of the country’s highest peak, Kebnekaise, changes from year to year because it consists of a glacier that alternately grows and melts.